New Rugby Australia chairman Paul McLean may only be in the hot seat for a few months but he's well aware that time will shape the face of rugby in this country for the foreseeable future.

Former Wallaby McLean was on Monday unveiled as an interim Rugby Australia chair, replacing Cameron Clyne, who will step down at next month's annual general meeting. 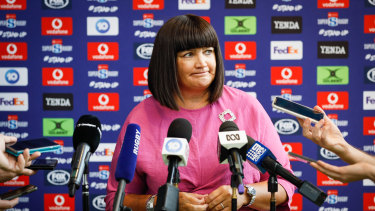 Raelene Castle and Rugby Australia have put the game’s broadcast rights out to tender.Credit:Getty

He will only stay in the position for a matter of months, though, as the board will appoint one of three new directors to ultimately take over as the permanent chairman.

Between now and the time he vacates the role, however, he will oversee a code in the midst of the most important broadcast rights negotiations in its short professional history.

Rugby Australia chief executive Raelene Castle has taken the rights – which now include the Shute Shield and Queensland's Premier Rugby competition – to market amongst growing angst about the 15-man code’s standing in Australia.

McLean backed Castle's ploy to test the market and admitted the game faced a make-or-break period away from the field.

"I don't think there's any doubt about that," McLean said when asked if the broadcast rights negotiations would prove critical to the future health of the game. 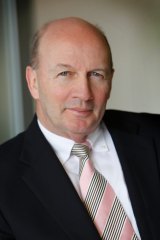 Castle's tenure as RA CEO will almost certainly be defined by the end result of the broadcast rights process but McLean – who has been a board member for the last eight years – is supportive of the former Canterbury Bulldogs NRL chief.

"I think she's done a terrific job in some really difficult circumstances," McLean said. "And a lot of those circumstances have been beyond her control. They were played out in the public interface and I think she has handled them really well. If you dig deeper I think you'd find behind the scenes things are running efficiently as well."

Broadcast negotiations aside, the sad state of Super Rugby in its current form will also be firmly on the agenda during McLean's brief time at the head of the board.

McLean does not subscribe to the theory that all is well within Australian rugby if the Wallabies are performing well, pointing to success at the provincial level as the key driver in the fortunes of the national team.

That is presently proving a sore point, as only the Brumbies appear a genuine hope of giving Super Rugby a shake this season.

The Waratahs' fortunes are particularly dire.

"I have no doubt we have the playing talent to create a really strong foundation to deliver but I wouldn't suscribe to the theory that because the Wallabies do well at the World Cup, life will be easy," McLean said. "We need continual success and if that is happening at Super Rugby level then it is much easier to attain success at the Wallabies level.

"There are some things we can't change immediately – including winning some games – but I genuinely think we have a raft of players now and in the next little while that have what it takes to step up.

"Rugby talent is cyclical and I think [director of rugby] Scott Johnson's view on that is that we will back these guys because we think they are the future.

"He has done that across the board and we have to be patient with young players moving forward but I think we're on the right track in that regard. Our playing strength will be OK."

The search is still on for the three people that will fill the vacant spots on the RA board.

The Herald last week revealed Sydney University stalwart David Mortimer was a frontrunner for the permanent role as chair.

"From what I'm aware of at the moment there is a strong cohort of potential directors from which we will be able to choose," McLean said. "In the next few weeks that will crystallise."