Andrew Johns has selected his greatest NSW team in State of Origin's 40-year history, with fullback James Tedesco the only current Blues player to make the eighth Immortal's best 17.

To celebrate Origin's 40-year anniversary, Channel Nine's expert commentary team has submitted its greatest NSW and Queensland sides as part of a panel to decide the best 17 of both teams over the past four decades. The Sydney Morning Herald has been granted a sneak peek into the results through Johns' team. 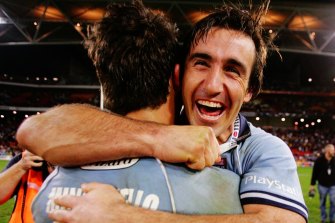 Rescue act: Johns, pictured with Anthony Minichiello, returned from injury to inspire the Blues to a series win in 2005.Credit:Craig Golding

The Newcastle legend, who left himself out of the side, struggled to find room for the likes of Boyd Cordner, Andrew Ettingshausen and Wayne Pearce in his star-studded Blues team, which included Phil Gould as coach.

The NSW team will be announced in the pre-game show of game two on November 11. The Queensland team will be unveiled before Nine's coverage of game three the following week.

James Tedesco: Him and Anthony Minichiello were neck and neck. It was hard to split them. Tim Brasher was close too. But I went with Tedesco.

Jarryd Hayne: He played in an era when Queensland were so dominant, and he was still the best player on the field in both teams. Some of the things he did in those series was just unbelievable, and when they won the series it was on the back of him.

Eric Grothe snr: He was so damaging. In an era when they didn't do much scientific weights, he would have been incredible. 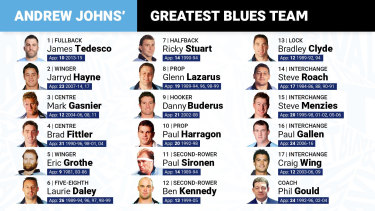 The team Andrew Johns selected as his greatest NSW side ahead of the 40-year anniversary of State of Origin.Credit:NRL.com

Laurie Daley and Ricky Stuart: Growing up, that was the era in the early 1990s when they won three in a row, and it was on the back of those two players. Just that combination, the long passing of Ricky and the running game of Laurie.

Danny Buderus: I was tossing up Benny [Elias] also, but I had to put my great mate Bedsy in there. I remember when we kicked off, might have been the first game at Suncorp, and the ball bounces. Shane Webcke gets it after it bounces and, as he looked up, Bedsy launches at him. It set the tone for the whole series. We won the series … it was all set up from the first play from Bedsy. 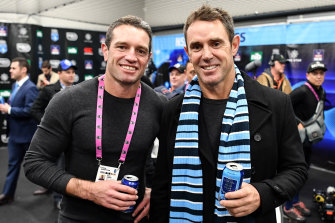 Paul Harragon and Glenn Lazarus: Chief [Harragon] picks himself because, at Origin level, he was just such an intimidator. Lazo is the best front-rower I've ever seen. Early on I played hooker in between those two and Lazo taught me a great deal about ruck defence. Not only was he a great player, but he was incredibly smart.

Paul Sironen and Ben Kennedy: Siro is one of NSW's finest in the back row. He always aimed up. Ben Kennedy was my favourite player to play with. He was just so intimidating and everyone loved playing with him. A great player in any era.

Bradley Clyde: One of the greats.

Paul Gallen: I couldn't put him in on the front row ahead of Chief and Lazo, but his leadership and the way he ripped into Queensland is what we're all about here in NSW.

Steve Roach: No one hates Queensland more than Blocker. Growing up when it was catch and kill out there, Blocker was catching and killing.

Steve Menzies: Beaver is the perfect bench player because he can play any position other than front row.

Craig Wing: He's probably the best jersey 14 player ever. No one talks about his toughness because he's such a handsome devil, but he was so tough.

Phil Gould: Taught me so much about footy and big-match mentality. He was the perfect coach for that six-week period to get anyone in tune. He was a genius at it.