Huge improvement from the Broncos, but the Panthers just had a few too many guns. I can't wait for the big western Sydney derby against the Eels next week.

Thanks for joining us and be sure to keep an eye on the Herald website for Phil Lutton's match report.

Good night (and say a little prayer you don't have to try to tackle this bloke).

It's all over at Suncorp Stadium. It was closer than most people thought it would be, but comfortable enough in the end for the NRL ladder leaders who saunter to a 25-12 win over the embattled Broncos.

Twelve straight wins for the Panthers, who just keep marching on. Far from their best, but they're one step closer to the JJ Giltinan Shield. 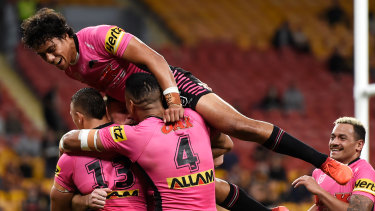 The Panthers racked up a 12th straight win.Credit:Getty Images

Cleary denied and then denies

Well, he is human after all.

Following a stone cold drop in the first half, Nathan Cleary can't quite ground an Api Koroisau kick under pressure from Corey Oates. Still a controlled performance from the form No.7 in the competition.

And on the next set Cleary is back to defuse a dangerous situation after a Kotoni Staggs break, which came after he swatted away Josh Mansour like a fly. He's not the first one to hit the deck after a Staggs fend this year.

Nathan Cleary puts the icing on the cake with a one-pointer he slots from 20 metres out right in front of the posts.

Penrith lead 25-12 with just over three minutes left and will chalk up a 12th straight win.

And there I was thinking we were going to a whole match without a captain's challenge. Is there anything more painful in the game? Before you howl me down, I know on occasions this year it has overturned a couple of decisions which have changed the result, and rightly so.

But I don't know if all the stoppages are worth it. Just a personal opinion.

Anyways, the Broncos challenge a knock-on call against Sean O'Sullivan. The ball is passed into Nathan Cleary, but the bunker rules it went forward. I still have no clue if it's the right call. 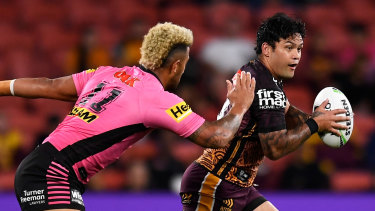 Just when you thought Brisbane might have the faintest of chances, there it goes.

Api Koroisau dead set weaves a spell over the Broncos defenders as he jumps out of dummy-half and shimmies across field, creating a bit of space and the ball eventually finds Brian To'o who scrambles over in the corner.

Nathan Cleary misses from near the touchline. It's 24-12 with only nine minutes left, but it's a long way back for the Broncos.

Well, well, well. We might have a game on our hands yet.

Tom Dearden's short ball finds a steaming Jordan Riki, who charges all of 40 metres and gets to the outside of Dylan Edwards to give the Broncos a lifeline. That defence was a little soft from the Panthers there as he exploded into a gap between Viliame Kikau and Jarome Luai.

Kotoni Staggs' conversion attempt from near the sideline is a beauty. It's 20-12 with 15 minutes left.

They couldn't, could they?

The most lethal halves combination in the competition this season…

The Broncos are just rubbing salt into their own widening wound now. Sean O'Sullivan and Corey Paix are put on report for a dangerous tackle on James Fisher-Harris. I think the match review committee will have a close look at that. 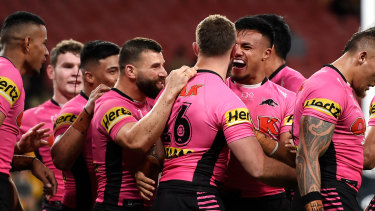 NRL: Round 11 team of the week