Dragons with first use of the ball.

In less than riveting news, both teams are 1-17 tonight.

Can the Titans cause an upset?

The Titans have been going well enough to earn Justin Holbrook a deal until the end of 2024.

No coach has a longer secured tenure right now.

But they're still enormous underdogs (the bookies have them at $3.75) to beat the Dragons tonight, who scraped past Brisbane this time last week.

I haven't had the initiative to tip an upset but it certainly wouldn't surprise.

If you're an Eels fan and you're still feeling sore and sorry after last night, look away now.

Dylan Brown could be out for the rest of the season after being booked in for surgery on a syndesmosis injury.

ICYMI, Souths were dealt some devastating news this afternoon. 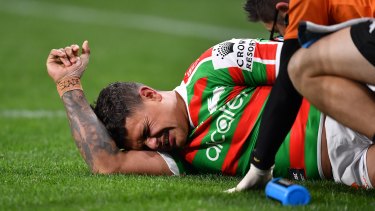 Latrell Mitchell will miss the rest of the season after suffering a ruptured hamstring tendon in their 38-0 thumping of the Eels on Thursday night.

Hello and welcome to another Friday night footy double header.

It's Sam Phillips here in the chair, ready to take you through five hours worth of action tonight.

First up, the Dragons host the Titans in what shapes as an intriguing clash between two teams out of the race for the top eight.

After that, the Roosters host the Broncos. I don't need to tell you why that clash may have tongues wagging come 10pm.