The NRL will introduce an 18th-man rule from round five as the game looks to combat a recent rise in the number of injuries and concussions.

The Australian Rugby League Commission on Tuesday agreed in principle to the new law, which will allow clubs to activate an 18th man when three players from a team have failed head injury assessments. 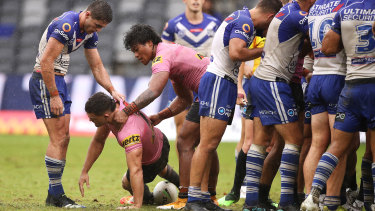 Nathan Cleary is helped to his feet after a careless high tackle by Dallin Watene-Zelezniak of the Bulldogs a fortnight ago.Credit:Getty

The law will not come into effect for another fortnight, with the NRL giving itself another week to sort out the logistics. The commission agreed the 18th player must be an emerging player.

Before introducing the measure, the ARLC will consult with the RLPA, clubs and coaches. The code will also need to determine the criteria around what constitutes an emerging player. ARLC chairman Peter V’landys said the commission had listened to players and clubs.

“This is a dynamic environment. As a commission, we have always said we would be agile in changing rules when it is in the best interests of the game and this is one of those examples,” V’landys said.

“We see this as an opportunity to give an emerging player a taste of first-grade rugby league in their team’s time of need. The 18th player will also have to be rotated weekly so you don’t have a young player missing out on playing lower grades every week.

“All fans agree we don’t want to see a situation where a club is left with one player on the bench and this rule change will provide insurance for all clubs. It will also only be activated in the most dire of circumstances for a club, so we don’t see it having a material impact on games every week.”

The commission has also given approval for Friday night’s match between the Storm and Broncos to proceed at AAMI Park, subject to the approval by the Victorian government for Brisbane to be granted a travel exemption.

A final decision on the location of the match will be made by midday Wednesday. If the game is unable to be played in Melbourne, it will become the second match in a Good Friday double header at Stadium Australia.

“We have activated the scenario planning we had in place should there be an outbreak. Yesterday we relocated the Brisbane Broncos to Sydney and today we have increased restrictions on players and clubs,” NRL chief executive Andrew Abdo said.

“We are confident Friday night’s game at AAMI Park will proceed, however if the circumstances change then the game will be relocated to Sydney.”

The NRL also told clubs the game would move to level two restrictions for all clubs after another eight COVID-19 cases were reported in Brisbane on Tuesday. Greater Brisbane was put in a three-day lockdown as of 5pm on Monday due to the cluster.

Players are banned from taking public transport, must wear masks in an indoor venue and will be temperature tested on arrival to games and training.

Panthers collect minor premiership as Dogs finish with an eyesore