Broncos star Tevita Pangai jnr will meet with officials from the NRL integrity unit on Zoom on Monday to discuss missing payments that have infuriated him and have the potential to cause problems for all those connected to his deal.

Sources at the NRL say Pangai is driving the issue. He is being pressured from some in the game to keep quiet and move on. 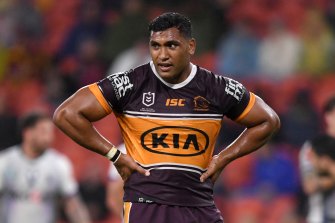 Tevita Pangai jnr is still hoping to save his career at the Broncos.Credit:NRL Photos

Pangai went on a charm offensive on Friday, conducting a series of interviews. But he is determined to find out who owes him what and why he has not seen the money.

There was an odd olive branch offered by the Broncos to Pangai during the week, delivered very publicly by Brisbane board member Darren Lockyer, who said he liked the passion Pangai has for the club.

It is impossible to know how far-reaching the meeting with the integrity unit will be. It will be Pangai’s second sit-down with the NRL. The first revealed his COVID-19 protocol breaches.

No one will tell me exactly what the deals promised to Pangai were worth, but sources close to the situation say it is a significant six-figure amount. The Warriors were left perplexed when they floated an $800,000 offer for Pangai and he ultimately signed for about $650,000 with Brisbane last year. The $150,000 disparity may be significant.

The most important issue the NRL will examine is if there is a record of the deals. Who made any promises and who did the deal at the Broncos are key questions that need to be answered. I’m sure the integrity unit has more questions than these.

You would anticipate Pangai’s agent, Isaac Moses, will want to be by his client’s side when he is asked about any extra income that was offered. Moses didn’t attend Pangai’s initial meeting with the integrity unit when he confessed to a range of biosecurity breaches.

A week ago it appeared Pangai had been hung, drawn and quartered. Remember we broke the news last week about the exact nature of his apparent contract breaches: the alleged criticism of the club in a phone call to Roosters boss Nick Politis, the failure to attend a team barbecue and his judiciary record. They were flimsy at best and, after we exposed them, they have been beefed up.
The club is now going to challenge Pangai about the breaches he confessed to during his first meeting with the integrity unit.

There is no better redemption story in the NRL than that of Darius Boyd. Critics have correctly questioned his form in recent times, but it’s hard to be down on his development as a man.

He has just received a Science of Well-Being certificate from Yale University in the US and is launching his own business, cleverly titled Battling The Blues.

‘‘I’ve suffered from mental health challenges for a large part of my life,’’ Boyd says on his company website. ‘‘I knew that I needed help and admitted myself to a mental health clinic, The Northside Clinic, Wentworthville. From this time, the change to my mental health has been dramatic. I continue to challenge myself and improve my mental health state every day.

"I have come from not knowing who my father is, what was a broken relationship with my mother and a lack of identity, whilst trying to forge a career as a professional rugby league player. I am now happily married to my wife Kayla and have a beautiful daughter Willow and I’m living out my dreams, which includes captaining my beloved Brisbane Broncos club.’’ 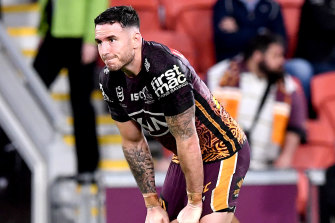 It’s impressively honest stuff. Darius has become a passionate advocate for mental health awareness. He has made it well known that beyond playing in the NRL he wants to grow his work in the mental health area, while adding to his skills and credentials.

‘‘Mental health is something we all have, be it good or poor, and that spectrum can change just like the rest of our health,’’ he said. ‘‘Battling the blues is not only my book title, but also my business, where I am passionate about continuing to raise awareness and working with businesses and people who want to better care for themselves and their staff.’’

The reinvention of Boyd has all been done under the guidance of his agent, George Mimis.

The Broncos were lucky the NRL fined them only $75,000 for the club’s biosecurity breaches at a Brisbane pub. Their level of co-operation with the investigation frustrated the governing body and the outcome was reached without accessing the CCTV footage the NRL wanted.

Before the decision, I put a few questions to Broncos CEO Paul White.

DW: Did the club approve this lunch and the venue? Were there any club reps there?
PW: The club was not aware they were going to lunch and neither the lunch nor the venue was approved by the club. There was no staff involvement.
DW: Why did the club tell Nine News last week that it was not an issue when asked about it?
PW: The NRL had spoken to us on the Friday after the event, when we confirmed that the players had attended for lunch and provided the names of the players, and there were no reported issues at that time.
DW: How do you respond to suggestions you tried to cover this up?
PW: Totally not true.
DW: What part of the COVID rules did the club not understand?
PW: The club understood the COVID rules and protocols clearly, as did the players involved. There has been constant and consistent communication with players and staff on Apollo requirements.
DW: Why is Anthony Seibold back in Brisbane?
PW: Because he has chosen to be, and he is allowed under Apollo protocols to complete his isolation period at home.
DW: Has the club asked him to return rather than being with his daughter in Sydney?
PW: No.
DW: Shouldn’t his family’s welfare be made a priority by the club?
PW: It has been our only concern at this time.

If Smith moves it will be to Broncos, say Titans

The Cameron Smith to the Titans rumour has been written about and denied on this page in previous weeks. We even told you last week about his wife’s potential house hunting on the Gold Coast.

The initial story I was told was that David Fifita had been tipped Smith would be the man passing him the ball if he joined the Titans. That assertion was denied.

The Titans think Smith will finish at Melbourne but, if he moves, it will be to the Broncos. They have been secretly hoping the Titans narrative will somehow drive Smith to the club. Titans officials rate him highly, describing him as the Tom Brady of the NRL.

The Titans claim there has never been a discussion about Smith, but they have discussed the stories about him. If there was even a slight chance of Smith heading to the Gold Coast they would find a way to clear their cap out to make it possible.

The Bulldogs’ lack of interest in signing Kieran Foran to a long-term deal is understandable given his injury run. But Foran is entitled to be unhappy with the role incoming coach Trent Barrett has played. Apart from Barrett telling the veteran playmaker he wanted him at the club, he also called on Foran, who has influence in the playing group, for support as he campaigned for the job.

Nine’s league coverage has secured an exclusive performance from Metallica as part of Friday night footy this week when the Roosters take on the Broncos. The performance of Enter Sandman, which will air in the post-game show, will promote their latest studio album, S&M2.

New Warriors pathways boss Phil Gould turned troubleshooter during the week and has already covered his wage many times over. The news that Vodafone was being forced out as naming-rights sponsor turned around in less than a day after Gould used his media connections to highlight what a bad look it was. The club learnt a strong lesson in his value.

The NRL has been dealing with the issue for some time. They told the Warriors of the need to phase out Vodafone as a naming-rights partner in 2018. For almost three years they have been working with the club so Vodafone could remain a partner. The Warriors and Vodafone couldn’t reach an agreement.

COVID-19 was the catalyst for further conflict when the Warriors’ home games were moved to Australia. Telstra was always supportive of the NRL working with the Warriors to modify the partnership to keep Vodafone’s investment in New Zealand only.

Wayne Pivac reveals there have been 'two or three' coronavirus cases

Chelsea transfer news LIVE: Edouard Mendy, Callum Hudson-Odoi, Ross Barkley, Ruben Loftus-Cheek plus updates
Recent Posts
This website uses cookies to improve your user experience and to provide you with advertisements that are relevant to your interests. By continuing to browse the site you are agreeing to our use of cookies.Ok