Brisbane have everything to play for here. A week after they leaked 60 points on an embarrassing night on home soil, they’re back with their finals hopes hanging in the balance. A loss to a Parramatta outfit still fighting for a place in the top four would leave the Broncos in a precarious position on 28 competition points, with the Canberra Raiders nipping at their heels. Parramatta playmaker Mitchell Moses and his Broncos counterpart Adam Reynolds will have a big say in how this one pans out, with the pair leading the competition in try assists. The Eels will be too good to set up a nervous final week in Brisbane. Eels by 6.
Caden Helmers

The Panthers will look to put on a cricket score as they celebrate the minor premiership in front of their home fans. The Warriors have clocked off while Penrith welcome back the all-star cavalry like James Fisher-Harris and Jarome Luai. They are too professional to let this one slip. A solid blowout will also make it easy for coach Ivan Cleary to give some of the big guns a spell in the final round. This could get ugly. Panthers by 30
Christian Nicolussi

Massive game for both clubs, mouth-watering for the neutrals. The Roosters are humming with an average of 42 points across a six-game winning streak. Matt Lodge and Jared Waerea-Hargreaves have been phenomenal with the platform they’ve laid, now reinforcements Siosiua Taukeiaho and Lindsay Collins return from injury. Melbourne too have pulled out of their mid-season tailspin in fine fashion. All the focus has been on Cameron Munster at fullback and Nelson Asofa-Solomona on the edge, and rightly so. But Brandon Smith and Harry Grant have been reprising that lethal one-two punch of 2021 around the ruck, too. One of the games of the season right here, tipping the tricolours’ roll to continue in a thriller. Roosters by four.
Dan Walsh 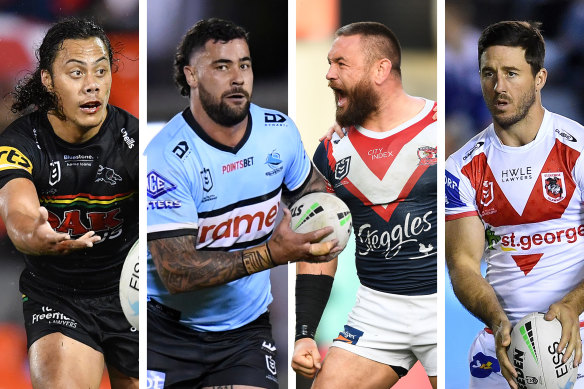 It’s a classic Canberra tale. Just when some thought it was safe to put a line through the Raiders, they go on a run to keep their finals hopes alive. The Raiders have won five of their past six and are knocking on the door of the top eight with two rounds to play. They should account for Manly comfortably. The Sea Eagles have dropped five games in a row and Jake Trbojevic, Reuben Garrick and Jason Saab have entered a packed casualty ward. The Raiders seem to like doing things the hard way sometimes, but they’ll get the job done on the back of match winners like Hudson Young, Joe Tapine and Jack Wighton. Raiders by 16.
Caden Helmers

It’s difficult to imagine anything but one result. The mini-resurgence the Bulldogs had been enjoying under Mick Potter appears to have come to an end as thoughts drift to next year and Cameron Ciraldo. Cronulla, meanwhile, are in the frame for a top-two finish after blowing away Manly at Brookvale Oval. Siosifa Talakai is in for the Sharks and Tevita Pangai jnr is out for the Dogs, making this even more lopsided, on paper at least. Matt Moylan combined superbly with Nicho Hynes in his comeback match, and the Sharks will send off Andrew Fifita in style for the forward’s last home game in the Shire. Cronulla by 26.
Adrian Proszenko

This will go down to the wire, and is important for both clubs. Souths need a win to guarantee a finals berth, and the Cowboys a victory to stay in the hunt for a top-two finish and home final. The loss of Tom Dearden is huge for the visitors. To make matters worse, Souths welcome back some troops, including rookie winger Izaac Thompson who is a big body and will help with the kick returns, and Kodi Nikorima will inject spark off the bench. Souths did well to hang in the fight with Penrith. They will need to do likewise against a genuine premiership contender. Souths by four.
Christian Nicolussi

Both sides are reaching deep into the top 30, and beyond, to fill out the team sheets for this one and neither can afford to cop a loss to compound already disappointing campaigns. Miserable is a more apt description for the Tigers, with the wheels coming off against the Roosters to the tune of 54 missed tackles and a record loss. Fijian back-rower Kitione Kautoga shapes as the latest Tigers debutant on the bench, at the very least he’s a physical specimen. The Dragons are missing plenty of regular faces, Jayden Sullivan starts at hooker in place of Andrew McCullough, with long minutes on the cards for the highly rated youngster. Not that he hasn’t already, but expect Ben Hunt to make a mockery of the $700,000-a-year offer the club has opened extension talks with. Dragons by 12.
Dan Walsh

What’s the old saying about saving the best for last? Ahem. Two teams for whom the season can’t finish fast enough, with the Titans trying to edge away from the wooden spoon with back-to-back wins at home. If their collapse in the final 20 minutes against a 12-man Dragons last week is anything to go by, it doesn’t augur well. Brian Kelly returns from injury and replaces the hobbled Patrick Herbert with Phil Sami needing to pass concussion protocols after his first-minute hit from Moses Mbye last week. Tyson Frizell (ribs) and Daniel Saifiti (COVID-19) are back for the Knights, while Enari Tuala is among the reserves after being dropped last week for missing the team bus. Titans by 4.
Adam Pengilly

See how the Herald’s experts tipped for Round 24 here.

No Buddy, no worries as slick Swans stun Lions with emphatic win