The NRL wants to extend its premium gambling tax to all finals matches as part of a compromise with frustrated bookmakers, who have only days to settle a standoff with the governing body by signing long-term integrity agreements.

The months-long dispute over the NRL's betting fees has taken another turn just weeks before the start of the season, with bookmakers now facing the prospect of paying a super tax on all finals fixtures. 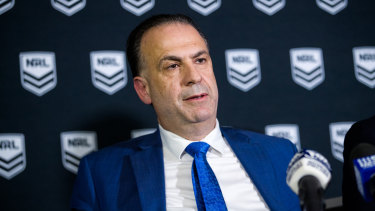 In return it has scrapped a previous commitment on how it would charge bookmakers taxes.

But it's poised to return to a monthly calculation, which will allow oddsmakers to even out results over a number of weeks and reduce the amount of money they will pay in product fees.

The concession has been the latest twist in a long-standing battle between the NRL and Australian wagering giants, which have argued rugby league is already the most heavily taxed domestic sport.

Global betting giant Betfair last week announced it had stopped matching bets on NRL pre-season matches while it tried to broker a deal with League Central. No other bookmaker has followed suit at this stage.

The exchange and other Australian bookmakers have days to sign integrity agreements with the NRL for the 2020 season.

Multiple wagering executives said they were unlikely to agree to the proposals, raising the prospect of integrity agreements being temporarily rolled over less than a fortnight before round one.

The standoff over betting taxes comes in the same year the NRL will be seeking to finalise a new official wagering partnership, with its deal with Sportsbet expiring at the end of the year.

The Paddy Power-owned behemoth signed a $60 million agreement with the NRL in 2016.

Australian Rugby League Commission chairman Peter V'landys is well versed in the wagering landscape having spent more than a decade as Racing NSW chief executive and having won a High Court challenge over how much bookmakers should pay the thoroughbred industry to bet on races.

He has previously butted heads with Betfair over a fee hike on horse racing in NSW, labelling its protests as a "mythical argument" and claiming it had a "flawed business model".

The NSW thoroughbred industry is enjoying record prizemoney levels on the back of wagering returns and tax concessions in recent years.