The NRL has given players a stern warning about ‘motivational messages’ they display on their wrists after Kane Evans was caught with an obscenity on his strapping on Sunday.

NRL football boss Graham Annesley said a sanction for Evans would be decided within 48 hours after cameras caught the Warriors prop with the words “fold some c—” written on his wrist while sitting on the bench as 18th man.

Evans was not activated during the game, despite the Warriors suffering four injuries in the first half – none of which were the result of foul play.

During his weekly football briefing, Annesley said offensive messages brought the game into disrepute and warned players against writing them.

“Anything that you put on your playing equipment item in terms of writing or anything you may carry attached to your equipment that is considered to be non-standard or offensive in anyway, you can’t expect that it won’t be picked up,” he said.

“You might think it’s only there for your own information or as a memory jogger or for whatever it might be. But here are cameras all over the venue, both still cameras and television cameras. It’s all in high definition it’s very easy to pick these things up.” 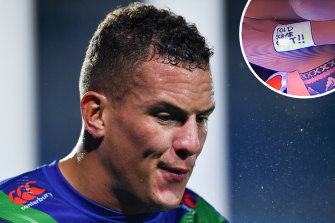 Kane Evans and the obscene message on his wrist strapping.

Warriors boss Cameron George told the Herald on Monday he was made aware of the offensive messaging during the game.

“I made sure the message got down to the bench, and the physio ended up putting some tape over it to cover it up,” the chief executive said. “I’m very disappointed, he knows that and I told him that. We’ll address it once we hear something [from the NRL]. We certainly don’t condone it and we’ll deal with it internally.”

On Monday, Annesley also sent a warning to players on the sidelines who were standing in as ball boys due to the tightened COVID-19 protocols.

Last weekend’s fixtures saw a number of high-profile players such as Manly duo Jake and Tom Trbojevic and Latrell Mitchell, who were being rested after State of Origin, in the role of ball boy.

Mitchell joined the celebrations for Taane Milne’s opening try for South Sydney during their win against the Bulldogs.

Annesley said players acting in the role should not get too heavily involved in the game, particularly when it came to melees or try celebrations.

He said he would be reminding each club of the role of the ball boy on Monday afternoon and said players had to remain “constrained”.

He said he would also be reminding clubs referees have the power to sin bin players in an effort deter teams from deliberately conceding six-agains.

“In terms of what you can and can’t do [as a ball boy], you’ve got to remain quite controlled,” he said.

“Not too exuberant. Not start barracking, or cheering or encouraging or directing, issuing instructions.

“Do the job you’ve been asked to do and I know it’s not their normal job. It is something they need to keep in the back of their minds.”