The NRL has pitched a proposal to split the competition into two conferences which would see new teams added in Brisbane and New Zealand as part of the game’s bold expansion plans.

The plans have the backing of one of the game’s most influential figures, with Wayne Bennett throwing his support behind the concept that would revolutionise the professional game. 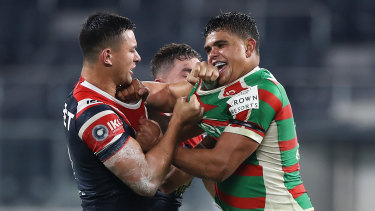 There will be more Sydney rivalries under the NRL’s bold proposal being pitched to clubs.Credit:Getty

NRL chief executive Andrew Abdo and chairman Peter V’landys have met with several clubs over the past fortnight to outline the long-term vision for the game in regards to expansion and how they can maximise future broadcast rights deals.

The NRL’s major source of income comes from its multi-million dollar television deals, with the game’s powerbrokers informing clubs that Channel Ten was interested in pinching the free-to-air rights from Channel Nine, the publisher of this masthead, from 2023.

One of the ideas to increase broadcast revenue is a radical proposal to follow the American sport conference systems, a move designed to increase rivalries and interest in the sport.

Abdo is the figurehead of a pitch that would see the competition expand from 16 to 18 teams in the coming years, which could allow the NRL to set up two conferences. It has been floated as an opportunity to “create three grand finals a year”. 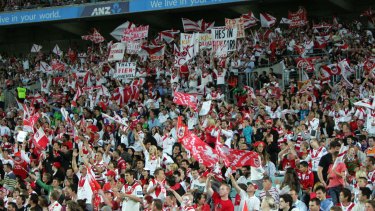 More than 71,000 Dragons and Tigers fans turned out for the 2010 preliminary final at ANZ Stadium.Credit:NRL Photos

“It’s a great sale point,” Bennett told the Herald on Thursday. “America does it in the Super Bowl. The biggest drawing final games we’ve had are when there are two Sydney teams. I went through it with the Dragons when we played the Tigers in the prelim. There was over 60 or 70,000 people there.

“The reality is the biggest crowds at finals times is when local teams play each other. They don’t get crowds when you get Brisbane or Melbourne against a Sydney team. The stupidity of it all is it’s always been about maximising the impact to the game. What they should want is rivalry and having the Tigers playing Parra home and away every year. A conference system guarantees it.”

One of the conference ideas revolves around creating more Sydney rivalries, placing the Roosters, Rabbitohs, Eels, Bulldogs, Tigers, Panthers, Dragons, Sharks and Sea Eagles into one Sydney conference. All teams in the Sydney conference would play each other twice, and play the remaining nine teams once in a 25 round season.

The other conference would include new teams in Brisbane, which is expected to be added into the competition in 2023, and a second team in New Zealand in the following years. 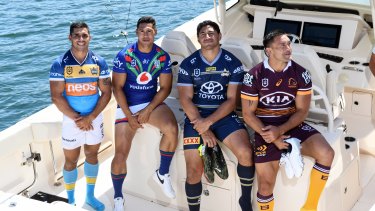 The Titans, Warriors, Cowboys and Broncos would all be in the outer-Sydney conference under a bold NRL proposal presented to clubs in recent weeks.Credit:NRL Photos

Other teams in the non-Sydney conference would include the Broncos, Titans, Cowboys, Storm, Warriors, Knights and Raiders.

Bennett admits he didn’t understand the magnitude of the tribalism in Sydney until he arrived at the Dragons in 2009.

“I’m a big believer in it,” Bennett told the Herald. “I know it’s a crowd changer. It won’t change the quality of football, though. You’ll get more rivalries and having lived in Brisbane and Sydney I now know the difference. Queensland has Origin as its great rivalry and Sydney has the rivalry between its clubs.

“Even Queensland, they have the Titans, Broncos and Cowboys. That’ll always bet there. Adding a fourth team in Queensland will only add to it as well. You still get to play other teams in the conference once, you just guarantee home and away in your conference – that’s what you get.”

“[Sydney fans] embrace the national league but they also embrace the club rivalry and unless you’re living in Sydney you don’t realise how strong it is. It’s what people outside of Sydney don’t get about Sydney is the genuine rivalry between the clubs here. It makes the game, I love it.”

Abdo declined to comment when approached by the Herald on Tuesday afternoon, describing discussions with clubs as “confidential” .

However in a recent NRL.com interview the game’s boss admitted he held a desire to look at alternative options in the future.

“Moving to 17 teams wouldn’t be an end point. It gets you closer to 18 teams and obviously 18 teams gives you a few different options,” Abdo said.

“An 18th team allows you to think about what we might want to do about expanding in New Zealand. Having two teams in New Zealand creates a tribalism and a new rivalry in New Zealand. It also gives you options around pools because you can have two pools of nine teams. As you see with some of the big US sports, as you grow your competition and the scale of the number of teams, you can create a dynamic around who plays who.

“Ultimately it creates more rivalries in regional areas and have competitions within competitions. You have to begin with the end in mind, you have to always keep an eye on the long term and you have to think about what is moving you closer to becoming an even more sustainable and relevant and viable sport.”

What has happened so far?

The NRL has already met with at least half a dozen clubs to discuss the game’s long term strategic plan, and will meet with the remaining clubs in the coming weeks.

On Tuesday Abdo and V’landys met with South Sydney’s executive team and board members on a range of topics, including stadiums, competition structure and how technology will impact on future broadcast deals. South Sydney officials told the Herald the NRL’s proposal was impressive.

How would it work?

The problem with that system means the NRL will never have an all-Sydney or a rivalry-fuelled grand final. The alternative system could see the top four teams in each conference ranked 1-8 (based on competition points) in a combined finals series identical to the current playoff structure.

Who would be opposed to it?

The teams in Sydney would be thrilled. It will generate more interest, greater crowd numbers and potentially allow the NRL to sell Sydney conference games at a premium to broadcasters.

The teams in the outer-Sydney conference may not be as ecstatic. They will have to travel more and crowd figures may take a hit. The four Queensland teams might not be as heavily impacted. The Warriors may welcome the rivalry but there may also be a financial impact on the club, as well as competition for juniors.

How does it impact on New Zealand?

Privately the NRL feels there is a huge opportunity in New Zealand given the financial state of rugby union in the country. While the 15-man code is by far the most dominant sport in New Zealand, the NRL believes a second team will help boost junior participation and create a rivalry with the Warriors that will increase interest across the ditch.

When will the NRL announce its plans for expansion?

The NRL is waiting on a business analysis from senior strategic projects manager Lachlan Smith in the next month before making a final decision on whether to begin interviewing bid consortiums led by the Redcliffe Dolphins, Brisbane Firehawks and Jets. A final decision is expected in August.

NRL stars’ faces turn up on turf at Bankwest Stadium

Inside the mad genius that is NSW Origin coach Brad Fittler