Home » Rugby » Once boring, now brilliant: Why the Storm are the NRL’s great entertainers

They carved a reputation as being a relentless NRL machine, one which Peter Sterling jests could go a whole season without throwing an offload. Craig Bellamy's team didn't play to a structure, they were the structure. Unfortunately for their rivals, it always seemed to work.

But on the eve of their fourth grand final appearance in five years, the Storm have opened the shoulders this year. Gone is the ultra risk-free model they previously mastered. Now, they have a highlights reel befitting any grand final winner, and they haven't even played in the big one yet.

Justin Olam crashes over from a Jahrome Hughes offload.Credit:SMH

With speed to burn through fullback Ryan Papenhuyzen and wingers Josh Addo-Carr and Suliasi Vunivalu, the Storm, some could argue, are playing rugby league how it should be played. They're the best exponent of the long-range try after evolving their attack in the new six-again era.

According to Champion Data, not a single team in the NRL comes close to the amount of tries scored by the Storm from positions on the field once treated with conservatism, rather than used for the cavalier.

They've notched 15 tries this year which have started in their own half – three more than the second best Roosters. But it's even more impressive when refining the numbers to four-pointers which started beyond the opposition's 40-metre line (23 in total).

"The Melbourne Storm of old, and I'm going back a fair way, they could almost go through a season without an offload," Sterling said. 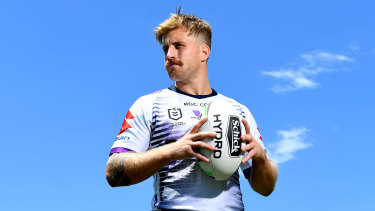 "It was straight through the middle, high completions, no errors and Cameron Smith operating out of dummy half.

"Their attack these days is different to other sides, they go wide early at both ends of the field. They will try to stretch the opposition defence and once they stretch them they come back to the middle.

"You can put all the effort in the world carrying the ball one out, but if you get smashed by four or five blokes you might not move the defence at all. It's easier to move the football in your own half because the defence is less intense.

"If you can get two or three passes wide you can get the defence one-on-one, particularly with a guy like Justin Olam, you're going to get a quick play-the-ball. They're not one out straight through the middle early in games. You can't relax against them at either end of the field."

Only St George Illawarra fullback Matt Dufty (eight) has scored more tries this year which started further than 40 metres away from the line than Papenhuyzen (seven). Addo-Carr also has six.

Yet Penrith's defence also ranks among the best at stopping long range tries, which could be at a premium given the wet conditions forecast for the grand final at ANZ Stadium on Sunday night.

The Titans (four) and Raiders (six) are the only team which have conceded fewer tries than the Panthers (seven) from outside that zone.

Sterling said Penrith coach Ivan Cleary's decision on who will start at right centre for the minor premiers will be pivotal given either Tyrone May, who took Brent Naden's starting spot in the preliminary final, will be faced with the threat of Olam, Addo-Carr, Papenhuyzen and Munster.

Suliasi Vunivalu scores yet another try for the Storm.Credit:SMH

Cleary won't announce the decision until an hour before kick-off.

"The thing about Penrith is they are very similar to Melbourne, they both have fast-moving defences," he said.

"Both sides could give away a penalty at any ruck. That's what they'll look to do again, which means both teams needs to stand a bit deeper in attack to give yourself an extra metre or two."

Everything up for grabs as football enters fast-moving broadcast market
Recent Posts
This website uses cookies to improve your user experience and to provide you with advertisements that are relevant to your interests. By continuing to browse the site you are agreeing to our use of cookies.Ok