Home » Rugby » Only fools rush in to write off Maroons

Queensland made me look like a fool last week, although that’s not hard to do. I just couldn’t see NSW losing.

In the second half, it was classic Queensland. Through grit and toughness, kicking long and chasing hard, they defended like their lives depended on it. 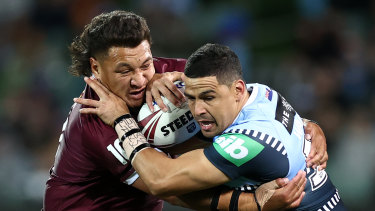 Cody Walker returns to the No. 6 jersey.Credit:Getty

The big advantage for NSW is still Damien Cook out of dummy half. This time, he will have his South Sydney teammate, Cody Walker, sniffing around the ruck alongside him. He knows how Cook plays: when he runs, where he will run.

The Blues’ halves and fullback, James Tedesco, will then need to follow up the good work of Cook with some trick shots. Once they start banging down the door, they have to stay there.

The kicking game is always important but especially so on Wednesday and that comes down to halfback Nathan Cleary.

Queensland have a new fullback in Valentine Holmes, who hasn’t played in seven weeks – and not much in the No.1 jumper. Cleary needs to kick early and isolate him, especially with towering winger Anthony Tupou coming through — something NSW didn’t exploit in the series opener.

I’d love to see the Blues, when they get to halfway, look to use “two passes”.

If they’re on the left, let Walker be first receiver to Cleary, which then gives you an option to run on the last. If the winger is back and you have an overlap, go through the hands. If the winger is up, kick in behind him.

Kurt Capewell played well for the Maroons but he is back rower playing in the centre and remains a real target in defence, especially if he plays with a groin injury that will affect his lateral movement.

How the Maroons can win

I don’t know what the Queensland No.6 jersey is made of, but they keep producing champions in that position.

It didn’t matter that Munster was coming off a grand final hangover. He might’ve needed some Quick-Eze for the heart burn but he’s an out-and-out Origin player. He wants the ball, wants to win and plays without fear of the consequences.

Another Origin player of the future for the Maroons is Xavier Coates. He brings some of the X-factor that Greg Inglis offered during his career. Whenever Queensland needed a try, GI scored it. I can see Coates becoming one of those players.

Queensland won game because of those effort areas I spoke about earlier. There were no fancy plays or trickery; just great support around the ball, getting offloads, and then Munster and Daly Cherry-Evans took over from there. That’s the blueprint again for them tonight.

I stand by my comments in the Herald last week that he should have been rested for this game.

Emotionally, it’s been a big month for him. He had all the noise around possibly winning the Dally M, then the grand final loss, then an Origin loss in a match NSW were expected to win.

Queensland’s defence put a lot of pressure on him, just as the Storm did in the grand final, so the first 15 minutes of each half will be really important for him.

He needs to simplify his game, build momentum for his forwards, and kick Queensland to death.

Then he needs to develop a feel for where the game is headed. When the momentum swings for NSW, he’s got to stand up, demand the ball and bring in his strike players.

NSW coach Brad Fittler believes he’s the Blues halfback for the next decade. He has to repay his coach’s loyalty.

Walker likes to hit his edge back-rower, who will run to the gap in the Queensland defensive line between Daly Cherry-Evans and their right back-rower, Jaydn Su’A, at marker.

They will get into marker and that will get a middle forward defending at first defender off the ruck.

Walker will see this, hiding behind the ruck with Tedesco. He’ll get over the advantage line quickly, sucking in that middle forward.

Jack Wighton will take that lead run from centre, sucking in the opposite centre with Tedesco swinging out the back and playing a two-on-one with Addo-Carr down that short side.

Walker was doing this play at the end of the year for Souths. Everyone knew it was coming but they could barely stop it.

Skin in the game: Addo-Carr’s tribute to iconic moment