Saracens are resigned to Owen Farrell being suspended for their make-or-break European quarterfinal tie with Leinster after his sending off on Saturday. The England captain will face an RFU disciplinary hearing this evening following his dismissal for a dangerous tackle on Wasps teenager Charlie Atkinson with Saracens anticipating a lengthy ban.

If it is three matches or more, Farrell will miss the Champions Cup showdown at the Aviva Stadium on September 19 and Saracens director of rugby believes it will be.

“I think we can safely assume that Owen won’t be available for that game and we will plan as such,” said Mark McCall.

“He stood on the touchline and waited for Charlie to get up and come off and he was really concerned for him.” 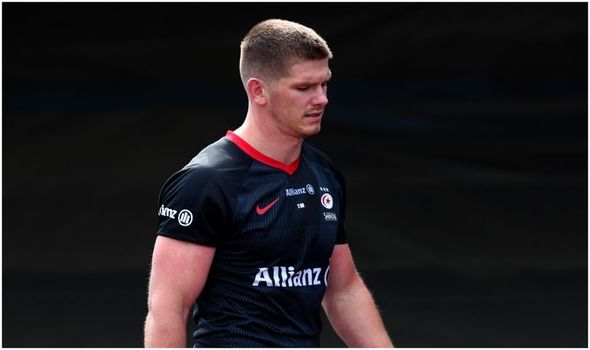 Saracens’ hope is that Farrell could be free to play in the semifinal a fortnight later if they can eliminate a Leinster side which has yet to lose this season. To that end, McCall will be using him in a coaching capacity instead.

“He will definitely be involved in helping us prepare for the game in terms of using his intellect and his rugby brain,” said McCall.

As for who replaces Farrell at stand-off for the quarterfinal, it is a straight choice between 32-year-old Alex Goode and Manu Vunipola – 12 years his junior.

Outside them, Saracens’ midfield options could expand if Scotland international Duncan Taylor comes through his first game since shoulder surgery tomorrow night at Sale.

“We were excited to see Owen, Elliot Daly and Goodey together in the same backline but that’s not going to be possible so we need to figure out what our midfield will look like and how Duncan Taylor does on Wednesday night will be important,” said McCall, who also confirmed that England prop Mako Vunipola is a doubt for Europe with a “lingering” back problem.

Farrell has sailed close to the wind before with his tackling but McCall has felt no need to address him directly over it since the incident.

“I haven’t spoken to him post-match about his tackle technique, no,” said McCall.

“This is his first red in 201 games for us and 80-odd games for England and the Lions so that speaks of a pretty good disciplinary record up to this point.”

Mitch Robinson: I absolutely respect Tigers, have no issue with Lynch

‘It’s going to cost you’: Slow starts will hurt sleeping Giants in finals

‘Best in the league’? Why Tampa Bay Rays are the perfect squad for MLB’s 2020 season

Arsenal star Lucas Torreira snubs two Serie A clubs as Atletico transfer nears
Recent Posts
This website uses cookies to improve your user experience and to provide you with advertisements that are relevant to your interests. By continuing to browse the site you are agreeing to our use of cookies.Ok