Call it $17 million well spent, as the Panthers’ regular-season outlay on their football teams saw Ivan Cleary and his NRL squad cheering on grand final wins at Under-21s and NSW Cup level.

No team has ever won all four grades in one season, but Penrith now have the chance to do just that. Not since Balmain in 1982 has a club claimed reserve grade, Jersey Flegg and SG Ball titles as Penrith’s trophy cabinet now boasts.

“It’s pretty amazing,” NRL co-captain Nathan Cleary said of the Panthers’ success across the board. There’s a lot of people doing amazing things behind the scenes for that to happen in the junior ranks.

“It’s hard to measure but with the pathway, everyone has a clear vision of what the club’s about and that filters the whole way through, what sort of culture you want to build. 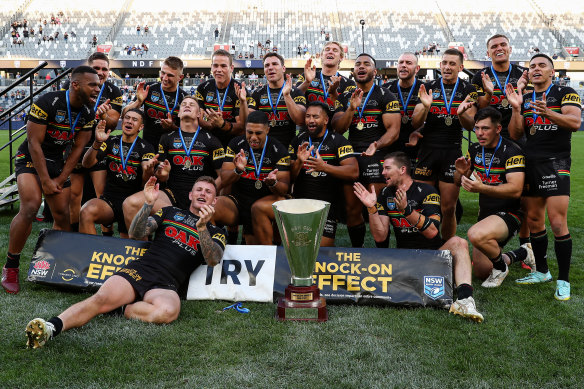 “I think people see that and they see a pathway to actually get to first grade. It’s a cool thing for younger guys to strive for.”

It was also Katoa who started the Panthers’ premiership run back in April, guiding their Under-19s side back from a 20-0 halftime deficit against the Roosters to earn a 22-20 win.

No wonder Wayne Bennett went after the best 18-year-old in the country to be the future of his Dolphins outfit. 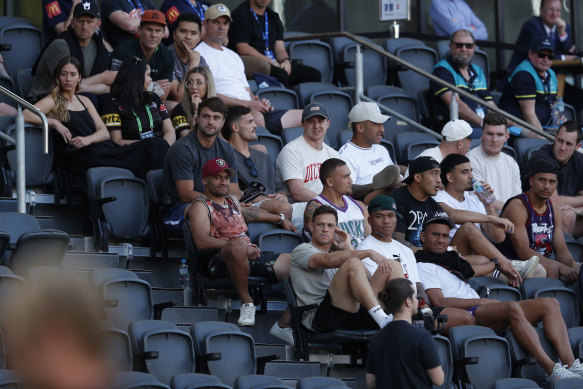 Nathan Cleary and the rest of the panthers’ first-grade side watch the NSW Cup final at Commbank Stadium.Credit:NRL Photos

Sean O’Sullivan – also off to Redcliffe next season – then doubled down less than two hours later as he, Jack Cole and Soni Luke led Penrith’s NSW Cup side to a 29-22 win over Canterbury.

Come Monday, O’Sullivan and his teammates will switch into opposition mode once more.

This is when Penrith’s incredible depth takes on a private but formidable focus, when reserve grade not only hold their own but more than occasionally knock off their NRL opponents in full 13-on-13 sessions.

Hence the NRL side’s decision to support their clubmates in person at the last minute.

“They were very vocal in supporting us all the way and even in our training, some days they’re doing opposed sessions for us at captain’s run.

“They always put the first-grade team first so we all wanted to come out here and support them.”