James Fisher-Harris is the kind of guy who plays with a chip on his shoulder. The kind of person who grew up watching NRL games just for hits.

The Penrith Panthers prop’s story starts on New Zealand’s North Island in Kohukohu, population of about 300, where he spent his weekends as a kid going hunting and fishing.

A move to Penrith as a teenager had Fisher-Harris far removed from the reality he knew. He was living above horse stables while rising through the club’s junior representative pathways. He didn’t know how to catch a train, had no idea where he was supposed to get off.

But the Panthers, a rugby league club who took a chance on a kid with a mean streak, gave him hope. So too did his partner Natalie. Now Fisher-Harris has emerged as one of the best props in the game.

Hardly sounds like a player who is going to take anything for granted at the best of times.

Especially now Test football is back on the horizon, and the long-awaited chance to do it on home soil means Fisher-Harris will take “nothing for granted” as he chases his seventh Test appearance for New Zealand. 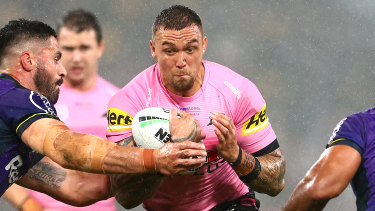 Penrith’s James Fisher-Harris is charging towards a Test return for New Zealand.Credit:Getty Images

Test matches have been put on the backburner throughout the COVID-19 pandemic. The Australian Kangaroos have not played a game since a shock loss to Tonga at Eden Park in November 2019. The Kiwis have been dormant since a series win over a touring Great Britain that same month.

Rugby league will return to New Zealand when the Kiwis host Tonga in a Test match in Auckland on June 25, marking the first game of elite rugby league played across the Tasman since the pandemic hit and the Warriors relocated to Australia.

“I’ve been talking to some of the Kiwi boys, we get a bit jealous watching Origin and all that. It is what it is, and hopefully Test footy gets back up there again.

“I’ve just got to make the squad first and hopefully I’ll get to go over and see the family back home. To pull on that black and white jersey, it’s been a while so I’m going to take nothing for granted.

“Just for everyone, we’ll never take it for granted, pulling on that jersey and representing our country.”

Fisher-Harris is bracing for a battle with one of the game’s most promising young props when the Panthers face the Newcastle Knights on Sunday.

Jacob Saifiti will fill the boots of his injured brother Daniel when he returns for the Knights after a stint in NSW Origin camp.

NSW players Nathan Cleary, Liam Martin, Isaah Yeo, Stephen Crichton, Brian To’o and Jarome Luai have all been named for the Panthers to back up from Wednesday night’s Origin series opener.

Penrith coach Ivan Cleary will make a final call on his Origin representatives following Saturday’s captain’s run. Matt Eisenhuth joins the bench ahead of Spencer Leniu in the only other change to the squad that beat the Bulldogs last week.

Newcastle will welcome Kalyn Ponga back into the fold after he played a key role in Queensland’s game one triumph. Dane Gagai also returns from Origin camp while Kurt Mann is set to play his first game since round seven after being named on Newcastle’s bench.

Bledisloe Cup: Safety fears for Wallabies if they beat All Blacks at Eden Park in Auckland this weekend