Home » Rugby » Past Eddie: Can England’s ringmaster recreate the circus of 2016?

In the weeks before England toured Australia in 2016, Eddie Jones sat his squad down and rolled black-and-white cricket footage.

It was vision of England’s tour of Australia in 1932-33. You know it better as the Bodyline series.

As prop Dan Cole explained later, Jones’ history lesson was to point out how England knew if played the game the way Don Bradman liked to play, they were toast. But like Douglas Jardine’s team, if you do it differently, play physically and aggressively and unsettle the Aussies, you can defy the odds.

As an Aussie cricket buff, Bodyline was a bold theme for Jones to spruik, given the ruthless tactics marked a low point in sporting relations between the two nations.

But it also worked, and by the end of June 2016, the same mindset had worked again. Redeeming themselves after the disastrous events of 2015 – where England exited their own World Cup in the pool stages – Jones’ tourists doubled their number of wins in Australia with a 3-0 series triumph.

Playing with physicality and aggression, England ambushed a Wallabies side looking to do a belated victory lap for home fans after their 2015 success. But the 2016 tour also served as a masterclass from Jones in unsettling Aussies. He had his countrymen back-pedalling on multiple fronts, on and off the field. 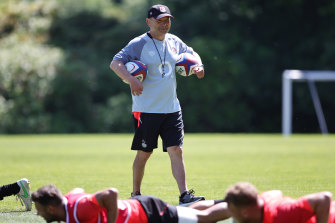 Eddie Jones looks on at England training ahead of the three-Test series against Australia.Credit:Getty

Six years later, Jones is back on tour in Australia and the question is: will it work again? Can the ringmaster conjure the same magic?

Time will tell but the early evidence is Jones has already dusted off the top hat and intends to give it a crack. A few days before England arrived in Perth this week, Jones said his squad should expect ‘hostile’ Australian crowds, and an in-your-face, aggressive media.

The fact neither are likely to happen doesn’t matter, given it was intended for his players’ ears only. And, crucially, it had worked before. On day one in 2016, Jones was quick to volunteer he had had his bags deliberately searched by customs upon arrival. Last weekend Jones indicated he made that up but it managed to wind up the locals and, crucially, laid more a few sandbags on the ramparts of England’s siege mentality.

The rivalry with Wallabies coach Michael Cheika was hyped but his old teammate didn’t bite, so Jones seized on light-hearted promo ads made by Fox Sports commentators, teasing England. (The promised retort from Sky Sports identities somehow never happened). A misjudged joke-question from former Wallaby Stephen Hoiles after the first Test was also pounced on by Jones, who said it continued a pattern of gross disrespect for England. Apologies were demanded. Friendships were strained. 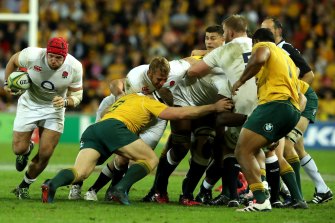 Run: James Haskell of England breaks with the ball against Australia at Suncorp Stadium in 2016. Credit:David Rogers

“It was that offensive to the team,” Jones said of the promo. “If they’re that desperate for ratings, there’s something wrong with rugby in this country.”

England’s team barely needed a top-up in the motivation tank after the humiliation of 2015 but Jones had his squad fired up.

“A coach will try anything they can to get the best out of their team,” then-Wallabies captain Stephen Moore said.

“Jake White used to do that a lot at the Brumbies, very effectively, and did it with the Springboks as well. Guys are spying on us at training and this sort of stuff. 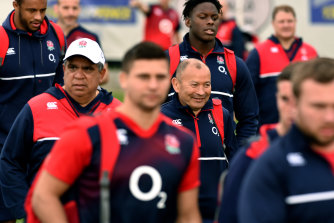 “Whether it is right or not, the effect it has is what matters, right? So coaches will use whatever they can to get their team motivated and win the game. If that means Eddie engages in a lot of off-field theatre, he will keep doing it. Whatever works, works. And I reckon it’s good. It keeps it interesting.”

Bernard Foley, who was the Wallabies No.10 in the 2016 series, said: “There was great momentum and optimism coming into that series because of what had happened (in 2015). But England had a point to prove and Eddie was able to come in with the ‘nothing to lose’ attitude and really galvanise that team. It was us against them stuff and everyone is going to be against us.”

England’s Bodyline-ish aggression didn’t pan out in the opening stages of the first Test, with the attack-minded Wallabies racing out to a 10-0 lead. But England clawed their way back with strong defence and 24 points from Owen Farrell’s boot, and won.

And long-term, the slow start worked in their favour. The Wallabies chased the same style on a wet night in Melbourne in the second Test, but England smothered it with 200 tackles and, via 29 per cent possession, counter-punched for a second win. And just like that, the series was over.

That England side in 2016, that was as tough a series as I have played.

The third Test was a higher-scoring affair but again England’s physicality won the day.

“After 2015, Eddie wanted England to go back to how they always had when they’d been successful, and that was a physical forward pack and strong defence,” Moore said. “That England side in 2016, that was as tough a series as I have played and up there with the best teams I have played against in my career in terms of the pace and physicality.”

Foley added: “We were playing really good footy but we missed the ability to gear down into the grind and to do the tough things to win those tight games. We got outmuscled.” 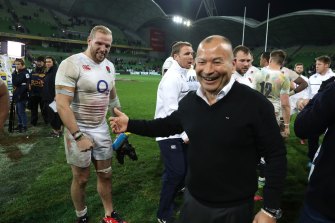 Eddie Jones jokes with James Haskell, after the flanker was instrumental in England’s second Test win, which secured the series.Credit:David Rogers

Closer to a World Cup than the last tour, Jones is again rebuilding his team but has brought a less experienced squad. And, unlike the honeymoon of 2016, Jones himself is under pressure. The Aussie has the shaky backing of the RFU, for now, but the stakes are high. A good old-fashioned siege mentality might be the perfect play again.

But Dave Rennie and the Wallabies are acutely aware of that and won’t provide a skerrick of ammunition.

As seen this week, they will kill Jones with compliments over the next month. Host broadcaster Stan made a pisstake ad but about English expats, not players.

Jones’ search for a launching pad will be tested. The traditional ex-Wallaby bomb throwers that Jones benefited from back in his Wallabies days, have mostly retired from active duty. On the field the Wallabies are no longer the all-out attackers that played into England’s defensive hands in 2016.

Former Wallabies captain James Horwill reckons Jones may even change tactics: “I think he’ll do the complete opposite. Everyone expects he’ll throw some barbs but he’ll be silent and won’t say anything. Last time he was here he was very outspoken and very bullish. He might go the other way around and be a bit timid.”

A silent Eddie Jones? Now that would be unsettling.

Watch every match of the July Test Series on the Home of Rugby, Stan Sport. Kicks off Saturday, July 2with Wallabies v England, New Zealand v Ireland, South Africa v Wales and Argentina v Scotland. All streaming ad-free, live and on demand only on Stan Sport.

Is the British and Irish Lions vs the Sharks on TV tonight? Kick-off time, channel and how to watch