Christian Petracca has put speculation about his future to bed before the season has even started by re-signing with Melbourne for another two seasons.

The dynamic midfielder was due to fall out of contract at season's end, but has re-committed until the end of 2022, by which point he will be a free agent. 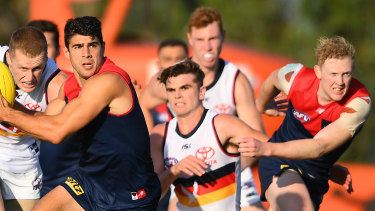 He finished fifth in the Melbourne best and fairest last season and started the Marsh pre-season series with a bang, racking up 38 disposals and kicking three goals in Saturday’s win over Adelaide at Casey Fields on the back of a big summer in which he has emerged visibly leaner.

“I guess the contract talks started a while ago now.

“I sat down with Goody (coach Simon Goodwin), Tim Lamb (list manager) and my manager, and I’ve always wanted to be at the club so to sign on for another two years is an amazing feeling.

“I’ve got so many mates here – they’re my closest mates.

“I see them every day and I probably annoy the hell out of them but I’m just so grateful to be a part of such a great group.

“I can call so many guys my brothers and mates for life.”

Petracca said he had never considered leaving the club.

“I think signing before the season just takes a little bit of stress off me and I’m honestly just very excited,” he said.

“Whether I signed now or at the end of the year, I always wanted to stay at the club.”

Melbourne football chief Josh Mahoney told the club's website that he was rapt that Petracca had re-signed.

“Christian is a passionate Melbourne person who we have watched develop each year and we are delighted that he has agreed to this extension prior to the season,” Mahoney said.

NRL 2020: Nathan Hindmarsh opens up on the Eels worrying record against Melbourne Storm