Mason Cox has been given a chance to resuscitate his flagging career, after Collingwood recalled the American forward for Monday night's critical date with North Melbourne at the Gabba.

The Magpies have also named veteran stopper Levi Greenwood to face his old side in what will be his first senior appearance in almost 12 months. 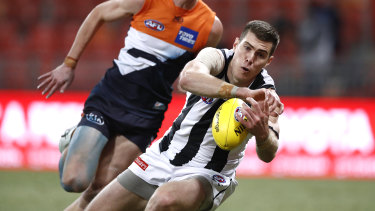 American Pie: Mason Cox in action against GWS in round 4.Credit:Getty Images

The Kangaroos meanwhile overlooked Jared Polec again after coach Rhyce Shaw opted against dousing the flames of speculation that the wingman could soon be on his way to a fourth AFL club.

Collingwood enter the clash with their finals chances looking shaky after a month of patchy form and injuries.

With forwards Brody Mihocek (concussion) and Ben Reid (hamstring) ruled out, the Pies have named the out-of-contract Cox, 29, for his first match since round six.

Greenwood, 31, also returns following an ACL tear in last year's qualifying final. Flynn Appleby, Jordan Roughead and Chris Mayne are the other inclusions, while Lynden Dunn, Callum Brown and Rupert Wills have been dropped from the side that was thrashed by Melbourne.

North regain Robbie Tarrant and have included Paul Ahern as well, with Will Walker out through injury and Sam Durdin dropped. 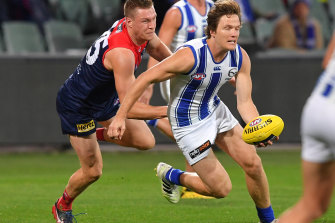 Jared Polec could be searching for his fourth club att he end of this season.Credit:Getty Images

Polec, who turns 28 in October, has been dropped twice in recent weeks as the lowly Kangaroos have turned towards youth.

North have flagged that they will prioritise drafting at the end of this season, leaving the futures of several experienced players appearing doubtful.

Included amongst them is out-of-contract spearhead Ben Brown, who has struggled this year with form and injury.

Polec remains contracted until the end of 2023, but with North favouring younger players of late, questions have been raised about whether Polec has a long-term future at Arden Street.

The former Brisbane Lions and Port Adelaide dasher joined the Kangaroos at the end of 2018.

Asked about Polec's future at the club, Shaw refused to provide clarity.

"I'm not going to talk about Jared's future or anyone else's future," Shaw said on Sunday.

"All I can talk about is what is happening now and I have really high standards and I expect a lot from my players in terms of playing their role."

North's football department chief Brady Rawlings said Brown was not yet ready to return from the knee injury that has kept him out of the Roos' past two matches.

Aiden Bonar (AC joint) and Jack Ziebell (hamstring) could be back within a fortnight, while Curtis Taylor (knee), Taylor Garner (hamstring) and Dom Tyson (calf) remain two to three weeks from returning.

Walker faces an uphill battle to return this season from a hamstring injury.

Shaw said he liked what he saw from the youngster against Brisbane in round 12.

"I was actually really disappointed that young Will Walker did his hamstring because he showed some really good signs last week that he was someone that we could build around and hopefully he gets an opportunity," Shaw said.

Meanwhile Rawlings said the soon to be off-contract Ben Jacobs, who hasn't played since mid-2018 with nose and concussion issues, remained a long way off playing again and was not yet at a level where he could train fully with the rest of his teammates.