A seat on the ARL Commission and an additional one per cent share of revenue – equating to about $13 million – are among the main sticking points as heated negotiations over a collective bargaining agreement head into a crucial meeting between the NRL and the players’ union on Wednesday.

The NRL has been unable to strike a deal with the players despite almost 12 months of protracted – and often public – negotiations. It means there is still no salary cap set for next year, despite the game’s financial year – and transfer season – having begun on November 1.

At the same time, the clubs are agitating for more money, seeking funding totalling $5 million above the salary cap figure. At present, the parties are about $500,000 apart.

The NRL is confident a deal will be struck with the clubs by the weekend but it is unlikely an agreement will be reached with the players any time soon. Even genuine, belated attempts to get to the negotiating table have come unstuck. Just as NRL CEO Andrew Abdo and ARLC chairman Peter V’landys cancelled a planned trip to the World Cup, Rugby League Players’ Association [RLPA] boss Clint Newton arrived in the UK.

The next meaningful dialogue between Abdo and Newton is scheduled for a video conference on Wednesday night [AEDT].

There are many stumbling blocks to overcome – the RLPA wants a seat on the commission while the NRL wants it to remain “independent”; the NRL wants transfer windows to regulate player movement while Newton views them as a “restraint of trade”. 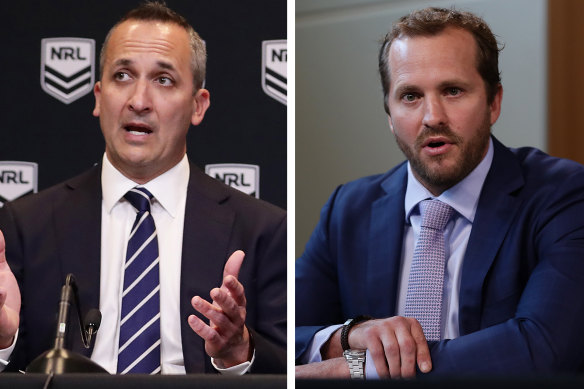 As always, the biggest stumbling block is money. Sources with knowledge of the situation told the Herald that head office was prepared to offer the players about 40.5 per cent of consolidated revenues, a figure the RLPA claims will result in them going backwards financially. They are seeking an additional one per cent, as well as a bigger slice of the pie if the NRL exceeds its forecast financial outcomes.

“It’s a CBA, it’s not an invitation to a birthday party,” Newton said. “It’s a critical agreement all parties need to be bound to and the game hasn’t demonstrated the level of maturity it should have around having a long-form CBA in place. Having been a part of three prior to this one, it’s a unique experience, I’d have to say that.

“I don’t think it would be held up as the gold standard in CBA negotiations.

“The players have chosen on this occasion to prioritise areas outside of player salaries, which is a testament to the playing group. They have demonstrated over the past three years to the industry just how much they care about the players towards the bottom end of the list, as well as their clubs, when they took pay cuts.

‘I don’t think it would be held up as the gold standard in CBA negotiations.’

“In the game’s darkest moments, the players did their very best to make sure everyone had the certainty to get through a very difficult period.”

Newton said a spot on the commission would ensure the players had a direct say on any changes to their employment conditions. He added the players had been respectful in not taking industrial action despite a frustrating bargaining process.

“If it got to any type of industrial action, it would be a disaster for the code. We have a great opportunity to reach agreement, have a CBA we can all stand on top of proudly and point to.

“We will continue to work through it and hold the line.”