In today’s AFL briefing, your daily wrap of news:

Check back throughout the day for more updates.

‘Go flat out’: Ponting keen to talk to Clarkson about North job

Ponting spoke enthusiastically about Clarkson in an appearance on The Believers: Tasmania’s AFL Journey podcast, according to a Fox Footy report, which said the podcast was due to be published next week. 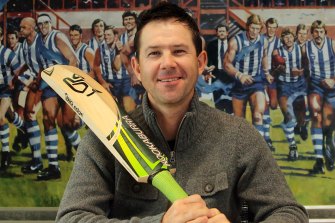 Ponting planned to meet with Clarkson this week and help sell to him on why he is the right person to take over the coaching reins at the Kangaroos.

The podcast is produced by Dynamic Sports and Entertainment Group which, according to their website, manages Ponting’s media and business affairs and represents Clarkson’s commercial interests.

Ponting saw Clarkson as an ideal fit for North Melbourne, and said the club’s current position was “not dissimilar” to where Hawthorn were when Clarkson took over as coach in 2005.

The Hawks finished second last in 2004 and won their first of four premierships under Clarkson in 2008.

Ponting also wanted the Kangaroos to appeal to Clarkson’s history, as he played in 93 games for the club between 1987 and 1995 before playing 41 games for Melbourne between 1996-1997.

“[He’s] the best coach in the AFL for the last 10 or 12 years, there’s a lot worse decisions you could make than to go flat out to try and bring someone like him back to where it all began,” Ponting was reported to have said.

“That’s the other part of that puzzle with him, obviously. He was there as a player then went to Melbourne [and] I think started his coaching career near Port Adelaide. If you think about where the footy club is now, it’s actually not dissimilar to where Hawthorn were when he first started there.

“I think he’s on record as saying that he thought it would be a seven-year journey and rebuild to a potential grand final. I think they won one after four [years] maybe.”

Ponting said signing Clarkson would be a boost for all Kangaroos supporters.

“It would just brighten every member’s hopes up on where we’re heading as a footy club,” Ponting said.

“And it’ll also send just a lot of great signals to everyone else in the AFL that they are, you know, they’re not going to keep accepting what’s happened the last couple of years.

“They’re fair dinkum, they’re trying to bring the best people in they possibly can and get this rebuild happening as quick as they can, so a lot of great messages would come as a result of it I think.”

The Magpies defeated the Bombers through an after-the-goal siren to Jamie Elliott on Sunday. After trailing by 37 points at quarter-time, Essendon surged to grab a 20-point lead during the final term.

But the plucky Magpies came again to kick the last four goals of a classic contest, including Elliott’s instantly iconic match-winner.

Post-game analysis has shifted to how the Bombers allowed Collingwood to transition from full-back with 45 seconds left.

It came after young Essendon forward Harrison Jones hit the post from a set shot earned from a ferocious tackle on Magpies star Jeremy Howe.

“I think because of the way we reviewed it, we’ll learn from it and hopefully never let that happen again,” McGrath said on Wednesday.

“We probably all had a moment in that play where we weren’t playing our role exactly right.

“I think there’s so many moments in a game, you can’t pinpoint just Harry for missing that goal.

“My dialogue to him was he gave us an opportunity to win the game, had he not made that tackle maybe they go up and score, anyway.

“I think on reflection and throughout our review we all had moments in that last quarter that we’d want to have back, every player can probably put their hand up and say that.”

Despite the agonising defeat, Essendon are finishing the season strongly following a disastrous start that prompted club president Paul Brasher to call an internal review of the Bombers’ football department.

Essendon (6-12, 14th) had already upset top-six teams the Sydney Swans and the Brisbane Lions in the past month, before falling just short against the red-hot Magpies, who have won nine consecutive games.

McGrath has full faith in coach Ben Rutten’s ability to have the group firing for the start of the 2023 season.

“[Rutten] was shattered about the result,” McGrath said. “I think his dialogue and his feeling was we did a lot right, we just didn’t nail the 120th minute.

“We’re all feeling hurt and disappointed.

“To come back from where we were and let it slip right at the end is shattering for players, fans and coaches.

“Through challenging times you are forced to learn and forced to adapt and turn into a different version of ourselves.”

Emerging defender Mason Redman spent Sunday night in hospital after being subbed out against Collingwood with internal bruising.

Redman is recovering from the incident but is in major doubt to face North Melbourne at Marvel Stadium on Sunday.

From the Archives, 2008: Saints outlast Swans for narrow win