Latrell Mitchell and Cody Walker are among a contingent of South Sydney stars who will share in a six-figure bonus if the club wins the premiership.

The Rabbitohs get the chance to avenge last year’s grand final loss to Penrith when they take on the premiers at Accor Stadium on Saturday night. Securing the trophy after coming agonisingly close in 2021 is motivation enough, but there will be a financial reward for some players as well if the “Pride of the League” secures just its second title in 51 years.

Mitchell and Latrell have bonus clauses in their contract that will be triggered if the pair complete a lap of honour on grand final day. Sources with knowledge of the situation have told the Herald that up to three of their teammates have similar contract clauses, which would result in a combined payout of about $150,000 if Souths secure their 22nd premiership.

The bonuses were almost triggered when South Sydney came close to clinching the 2021 decider, only for the Panthers to prevail 14-12. The Rabbitohs believe the extra payments are a small price to pay if all the parties achieve their desired goal, knowing the sum won’t bend the salary cap out of shape.

While player managers often try to negotiate a representative bonus into the contracts of their clients should they represent at State of Origin or Test level, premiership bonuses are relatively rare. In the case of the Souths players, the club took their request as an indication that success at Redfern was their top priority and had little hesitation in agreeing to the clause.

Parramatta halfback Mitchell Moses has one in his contract and his earnings will crack the $1 million mark if he can achieve the feat, a reward that remains a possibility if the Eels can account for North Queensland in Townsville on Friday night. Former Knights halfback Mitchell Pearce also had bonuses based on the club’s finishing position when he first arrived in the Hunter; a $75,000 kicker for a top-eight finish and $150,000 for top four. 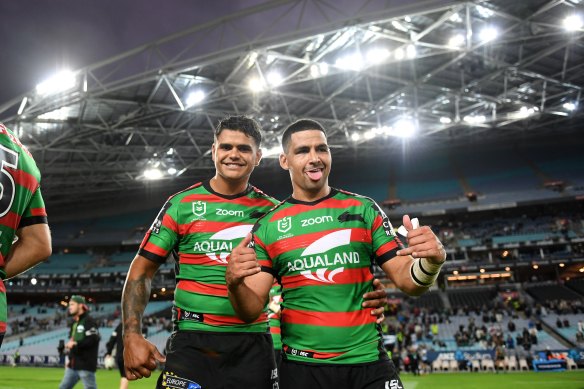 Latrell Mitchell and Cody Walker will get bonus payments if Souths win the premiership.Credit:NRL Photos

The challenge now is to retain superstars Mitchell, Walker and Cook and the club is confident of doing so before they become free agents on November 1.

“It’s unreal to be able to experience finals footy in my first year of first grade,” Tass said.

“Souths came out of nowhere and gave me an opportunity and I’m here for another two years.

“We’ll go out there and do our job this weekend. Whatever happens happens, but I’m more than confident that we can get the job done and go on for another week.”

Fellow outside back Milne, who scored two tries against the Roosters, added: “To be involved on the field on the weekend, that was the best moment of my career so far. It’s my second final game, it feels special.

“Playing with these boys is unreal. Sometimes I just have to catch the ball and put it down. It’s good when you’ve got players like Latrell, Cam [Murray] and Cody around you, it makes you confident you can do your job.”