Home » Rugby » Put your hand up, Brad: Why Scott should go for the Essendon job

As yet, Brad Scott has not been willing to make himself a candidate for the Essendon coaching position that Alastair Clarkson spurned.

It is understandable why Scott, like Ross Lyon, Leon Cameron and Don Pyke – and contracted senior coaches – would be reluctant or unable to pursue what really should be viewed as an incredible opportunity, comparable to Carlton’s coaching job 12 months ago.

Each of those recent or current senior coaches have particular circumstances or reasons for passing. Lyon’s was that “the vibe” at Essendon wasn’t right and hinted that the Bombers were not sufficiently aligned as a club, without specifying his misgivings. 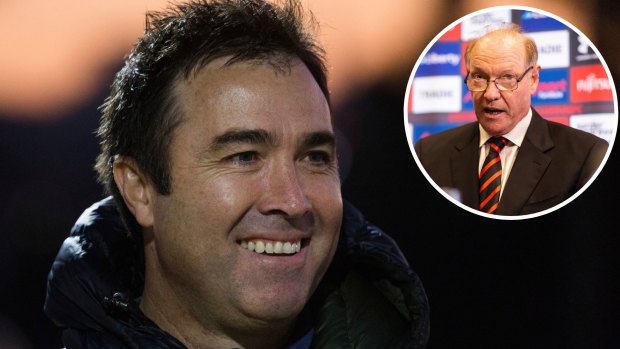 Pyke hasn’t pursued any senior job following his traumatic end days in Adelaide, while Cameron said he wanted a year away from coaching and didn’t feel he could commit.

So, the runway is largely clear for Scott, should he be willing to entertain the prospect of coaching at the Hangar. 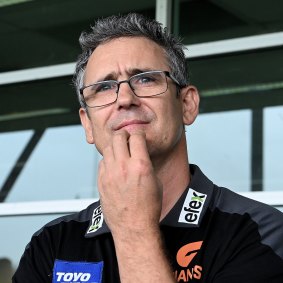 Under the urgent direction of their new president David Barham, the Bombers are determined to run a full-bore process in the knowledge that coaching appointments haven’t been as rigorous or successful as their rivals; the departed Ben Rutten – now safely back in the more orderly surrounds of Punt Road (times truly have changed!) – was hired without the Bombers going to market, as Carlton and Collingwood did last year.

But if Scott is willing to pursue the Essendon job, it is obvious that the process for him will not involve as many steps as for the other candidates in the field, given his nearly 10 years as a senior coach at North Melbourne, plus three years as an assistant at Collingwood.

Scott would be fast-tracked, if not offered the position outright. But Essendon’s need for process means he would still need to sell his vision and speak to the coaching panel headed by football boss Josh Mahoney before he could be given the nod.

Most likely, he would be competing with the pick of the experienced assistants, headed by Melbourne’s Adem Yze, and placed into a two-man play-off. While others think James Hird is genuinely in the running, like Tim Watson this column would be very surprised if Hird, given all the scar tissue his appointment carries, was chosen. 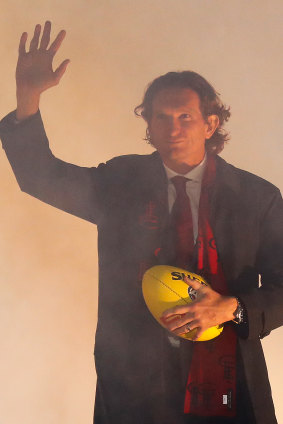 There are observers within the game who believe that Scott – who performed well at Arden Street until the last season given average lists, lack of cachet and limited resources – risks closing the door to a coaching future if he puts his hand up for Essendon and gets hit by the red and black propeller.

I don’t see this as probable for this reason: Essendon may well represent Scott’s last opportunity to coach. If he doesn’t land at Essendon, he will be four years out of coaching and the bird will likely have flown.

As general manager of football, Scott has a major say in the AFL’s management of the on-field product. His ascension is all but assured if he sticks with the AFL bureaucracy; if Andrew Dillon succeeds Gillon McLachlan, Scott would be logical outright head of the football division, the footy czar of the competition.

But nothing Scott achieves at AFL headquarters would be as satisfying, or as historically important, as reviving one of the great and long-dormant powers.

Essendon has assets that make it an easier proposition than North Melbourne, despite the continued impact of equalisation. Under Scott, the Roos continually struggled to attract quality players, even when dangling ludicrous contracts (see Josh Kelly, Andrew Gaff, and Isaac Heeney). This will not be such an obstacle at Essendon, who also have about $2.5 million in salary cap space.

Essendon’s deficit is cultural, rather than financial. If other coaches view Essendon’s insularity or political intrigues – the factions, the coteries and so forth – as problematic, the alternative is to see these problems as a major opportunity. Scott should be asking as many questions of Essendon as Essendon asks of him.

Scott, or whoever else takes this job, will be given the chance to change the culture of one of the competition’s leviathan clubs – as Kevin Sheedy did when he brought Richmond ruthlessness and his own eccentric, inventive ways to Windy Hill.

Carlton appeared to be a mess 12 months ago when they had their velvet revolution, which saw the CEO and coach sacked, the board revamped, and a new president presiding over an external review – nearly identical to Essendon’s scenario. Today, the Blues – despite missing finals – are on the march.

The Bombers’ playing list does not have Carlton’s A-graders at the top, nor leaders of Patrick Cripps’ or Sam Walsh’s calibre. The revival will not be as rapid.

The list, however, is young and has significant growth. Positional holes can be redressed with mature players, via that salary cap hole, and the Dons have another top-five pick this year.

Scott’s prospective choice can define his legacy in the game. He can either stick with worthy public service at the more tranquil AFL HQ, or back himself in to turn around this large and unruly club. The rewards for the latter will be far greater.