Adam Cerra usually makes the right decision with the ball in his hands. In the coming weeks, he will make the most important call of his career to date when he decides where he’ll play after this season.

Theoretically, he has up to 10 potential options – nine Melbourne clubs, plus sticking with Fremantle. In practice, the choice is much narrower, given the salary cap constraints, specific needs and draft capital of the various clubs.

North Melbourne, for instance, won’t be a bidder for Cerra. Their need is for speed and flair and Cerra, a smooth but not swift mover, doesn’t fit it. 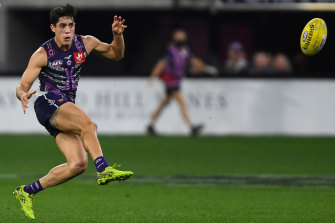 Collingwood can be dismissed, since the Pies don’t have either the salary cap room or a first round draft choice in 2021 that could be spent on Cerra.

The Western Bulldogs already have a stacked midfield and a packed salary cap. Forget them.

Melbourne would need to lose someone to find the salary space to accommodate Cerra, who reportedly will command more than $700,000 from the Dockers; certainly, he won’t be moving for less than $600,000.

St Kilda seems more likely to head to the draft this year after splurging on seasoned recruits in 2019-20. Hawthorn can make a play, but they’d be weighing up whether they want to lose their first pick – likely top 5-6 – at the mid-point of a regeneration that is already showing the first green shoots.

That leaves the following options: Carlton, Essendon and Richmond.

Essendon aren’t committed to either the draft or topping up. Does Cerra fit their needs? Debatable. The biggest holes are key defenders (though Zach Reid might be one) – and probably key forward, despite Harrison Jones’s promise.

The Blues have been interested in Cerra, which isn’t surprising in view of their midfield roll call of Sam Walsh and Patrick Cripps, daylight and then? Ed Curnow maybe, or – if you believe in him – eventually Paddy Dow.

But the most fascinating possibility is the Tigers.

Cerra grew up in a yellow and black household, as a Richmond supporter. I’d guess if that if Jack Riewoldt, Dusty Martin and Trent Cotchin importuned him with tales of Richmond exceptionalism, he’d find it hard not to be impressed.

But if Cerra is as shrewd in his decision-making off the field as on, he’d be wise to sidestep the Richmond option, at least this time.

Richmond, who have one of the premier list managers in Blair Hartley, should do likewise. The Tigers should not be chasing Cerra, either.

On the surface, one can see why a union of Cerra and Richmond may hold appeal to both parties: Cerra, at 187cm, has the bigger body that the Tigers don’t have in abundance.

If they snagged Cerra, could it not give them a young, talented midfielder, who’s completed his apprenticeship, helping extend their premiership window, while the fabled core of the 2017-2021 team are still around?

Maybe. That’s the case for Cerra. The case against chasing him, however, is more compelling.

The history of recent AFL dynasties is that they last about five years before the onset of decline – either gradual or rapid – as stars enter their 30s and the draft’s gravitational force drags the super team down.

The Brisbane Lions fell off the cliff in 2005 after four consecutive grand finals.

But the more relevant comparison for the Tigers is the team coached by Damien Hardwick’s close mate, Alastair Clarkson.

In 2016, Hawthorn bowed out in the second week of the finals to the Bulldogs, ending their bid for a fourth consecutive flag.

Faced with a raft of ageing champs, the Hawks made the bold decision to jettison Jordan Lewis (Melbourne) and Sam Mitchell (West Coast, on coaching sabbatical); the following year, Luke Hodge was retired, only to re-animate in Lion colours. 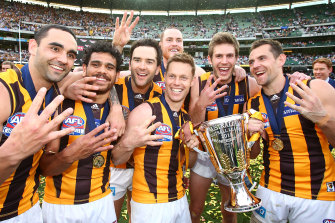 The final stage of the Hawthorn dynasty in 2015.Credit:Fairfax Photographic

As these club legends shuffled off, the Hawks struck a remarkable trade heist, acquiring both Jaeger O’Meara from the hapless Gold Coast Suns and Tom Mitchell from the Swans.

Hawthorn can say, rightly, that Mitchell won a Brownlow and when fit, O’Meara is their best player.

But hindsight suggests that the purchase of O’Meara and Mitchell did not fit Hawthorn’s demographic and rebuild imperatives. Five years on, that pair have spent their prime years at a club that’s not contended once for the premiership, only making finals in 2018.

If they see success, it will be in a Shane Crawford-style twilight.

Cerra should be choosing a team that’s on the crest of a success wave (Tom Lynch and Dion Prestia timed it perfectly), not one that’s ridden the glorious breaker.

But history and list demographics still suggest that they will find it difficult to remain in flag contention after this year.

Riewoldt and Shane Edwards are 33 this October. Cotchin is 31, Dusty turned 30 last week, Dylan Grimes will be 30 this month. David Astbury is 30 and Bachar Houli, at 33, might be finishing up. Even Lynch and Prestia turn 29 in October. Bolton is the only definite A-grader under 25.

One proviso: recruiting Cerra would be more feasible if Cotchin suddenly retired, or in the improbable scenario of Bolton seeking a trade home to Fremantle.

History’s lesson is clear, though. Teams fallen from the heights of multiple flags don’t defy gravity, and the sooner they invest in the draft – the path the Hawks eschewed in 2016, only to end up in a harsher rebuild four years later – the faster they will see a renaissance.

Ok Geelong did levitate, but they’ve had highly unusual circumstances – one is called Patrick Dangerfield, others called Tom Stewart, Tim Kelly and Jeremy Cameron. Even then, they’ve not won a flag since 2011.

For the first time in a while, the Tigers will enter this post-season with a potent draft hand. Their first choice shapes as proximate to 10-12, and they have Geelong’s first pick, plus St Kilda’s second pick and their own.

The logical play for Richmond is to head to the draft.

What’s Cerra’s best option? He should be sticking with the Dockers for another two seasons, as they seem on the rise. He will have a better range of options if he wants to leave after 2023, or can extend until free agency (2025).

Que Cerra, Cerra. Wherever he’ll be, he’ll be.

‘A tragedy and missed opportunity’: Rugby slammed over board make-up