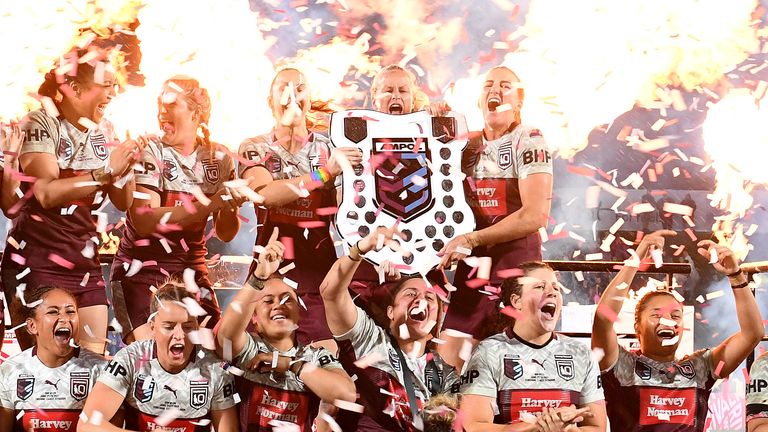 The Blues were penalised from directly in front for a leg pull on Chelsea Lenarduzzi as she tried to play-the-ball when the Maroons were setting up for a field goal.

The call on Blues forward Filomina Hanisi was a harsh way to decide a tense and tight clash played in difficult conditions and Maroons centre Lauren Brown made no mistake from in front.

Queensland hooker Destiny Brill produced a superb Origin debut, while chief playmaker Ali Brigginshaw was at her orchestrating best in the middle of the field late in the game.

The Sky Blues signalled their intentions from the kick-off with an immediate shift to the right edge with the ball but struggled to complete their sets in the greasy conditions.

Their last-play options left a lot to be desired with halves Maddie Studdon and Corban McGregor struggling in the wet.

Maroons forward Tazmin Gray was placed on report for a high tackle and the visitors took advantage of the repeat set to cross first through Isabelle Kelly.

Kelly carried four Maroons defenders over the line with the Sky Blues making in-roads on the left edge.

Recalled half-back Studdon produced a mixed bag with two errors on the attack restricting NSW from going further in front.

The momentum began to swing in return with Brill denied a four-pointer when she was held up, while Karina Brown couldn’t grasp a wayward Zahara Temara pass with the line in sight.

The Sky Blues’ ill-discipline began to creep in before the break with Simaima Taufa (crusher) and Kezie Apps (high tackle) placed on report.

Queensland took immediate advantage of Apps’ foul play with Brill fooling the NSW defenders close to the line in the 24th minute.

The Maroons went into the break leading 6-4 but the Sky Blues levelled the scores when Lenarduzzi collected Southwell high right in front of the posts and Studdon knocked the penalty goal over.

What a performance! 🏅#Origin pic.twitter.com/1WUGAX7AdZ

Maroons fullback Tamika Upton looked to have put the home side in front with seven minutes remaining but the Bunker ruled a no try due to obstruction by Julia Robinson in the lead-up.

A dropped ball by Kelly with four minutes to go opened the door for the Maroons and it was Lauren Brown who stepped up to ice the game with the penalty goal.

Brill finished the night with 29 tackles, four tackle breaks and 64 running metres to announce herself as an Origin star for many years to come while Gray made 125 metres from 15 hit-ups.

After losing the first two Origin games at North Sydney Oval in 2018 and ’19 the Maroons have hit back hard on home territory, winning last November’s clash and repeating the dose in 2021.