Home » Rugby » Raiders have most to lose from Storm resting players, but Stuart’s a fan

Ricky Stuart has leapt to the defence of good friend Craig Bellamy’s resting policy – even if it ends his own team’s finals chances – arguing the NRL’s expansion plans will be tested with dozens of stars putting their feet up.

Stuart’s Raiders need to beat the Roosters on Thursday night and rely on the minor premiership-chasing Storm toppling eighth-placed Cronulla less than 24 hours later if Canberra is to salvage a finals spot from a turbulent season.

Bellamy will be missing eight first-team regulars – including Cameron Munster, Josh Addo-Carr, Felise Kaufusi and Christian Welch – as his side prepares for the finals.

But the man who has the most to lose from Storm’s approach said he doesn’t have an issue at all with it, arguing title heavyweights the Storm, Rabbitohs and Eels can do what they want with finals spots locked in before the last round.

“I think if you’ve earned the position to rest players this week, well, good on you,” Stuart said. “I was criticised last year for debuting so many young players – and we went out and beat the Sharks. There wasn’t much criticism after it.

“If we want to start criticising coaches for resting players to give them the best shot of winning a semi-final, it is pretty disappointing because you are doing everything you can to win a semi-final. If that means resting players, you’ve earned the opportunity to do that throughout a very tough season. 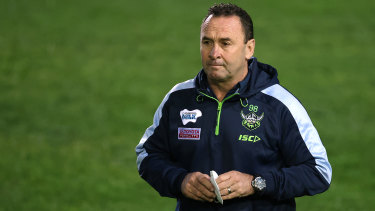 “We’ve got a game that wants to expand and go and find another club in Brisbane. Don’t you think it is a positive that we can rest players and give another young guy a chance to play first grade?”

The three suitors to be the NRL’s newest team – the Brisbane-based Dolphins, Firehawks and Jets – have all fended off accusations there is not enough talent to prop up another franchise.

The Australian Rugby League Commission is expected to decide whether it will add a 17th franchise to the competition in either 2023 or 2024 in coming weeks.

But Stuart’s first task will be to upset the decimated Roosters, who will at least welcome back Angus Crichton, Josh Morris, Adam Keighran and Matt Ikuvalu from suspension and injury – less than a week after their emotional showdown against the Rabbitohs.

“I was criticised last year for debuting so many young players – and we went out and beat the Sharks. There wasn’t much criticism after it.”

Former player Latrell Mitchell was suspended for six weeks after a high shot which fractured the cheekbone of ex-teammate Joseph Manu, who is also out for the season.

The Raiders ended the two-time defending premiers’ title defence last year in the second week of the finals – and will be relishing the chance to return the favour to Stuart’s men.

Canberra will welcome back veteran forward Sia Soliola, who missed last week’s last-gasp win over the Warriors after the death of his mother.

Senior players such as captain Elliott Whitehead pushed for Soliola to be rushed straight back into the team.

Asked if the 35-year-old would play on beyond this year, Stuart said: “He has had a very, very distinguished career, but I’m yet to sit down with Sia. It is a really important part of the season, and those discussions will be had a later date.

“But it is important that everyone fulfils their role, and as a coach you know exactly what you are going to get from a guy like Sia defensively and in attack. The boys all look up to Sia. They all call him uncle and it is the type of respect that he has earnt.”

Derby Quiz: Test your knowledge and win tickets to the 2022 Epsom Derby and an Apple Ipad