Home » Rugby » Random Souths, guys: A love affair with the Bunnies beyond The Burrow

If you head south-west from Brisbane, out past Ipswich and into the heart of the Scenic Rim, the highways slowly start regressing into quieter rural roads surrounded by parched paddocks desperate for a spring drink.

Take a right turn before you reach Boonah and you head up a road where the bitumen turns into dirt. There, on your right, is a giant tribute to South Sydney Rabbitohs made of hay bales. Reg-Hay Rabbit surveys all before him as the welcome storms roll in over the pastures. 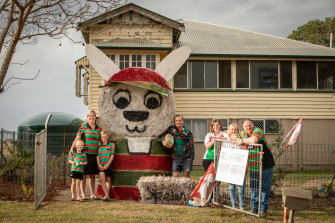 Souths fans the Skewes family have built a giant Reggie Rabbit in their front yard out of hay bales in Coulson west of Brisbane ahead of the NRL grand final this weekend. Credit:Paul Harris

They really are everywhere, random Souths guys. Even here, more than an hour outside Brisbane, is a family as passionate as any from the traditional heartland, to the point they felt moved to construct a towering tribute for the Kalbar Country Day hay sculpture competition.

“Back in the early days, they wanted to start a rugby league club here in Boonah. They looked for sponsors but a number of us, we were only young, we wanted to be Rabbitohs because that was the team to support,” says Brett Skewes, the patriarch of a proud Souths clan.

“Boonah football club had to approach South Sydney to ask if we could use their colours and emblem, and they could not do enough for us. They sent up boxes and boxes of jerseys and books and that’s how the friendship and the love of Souths developed.

“I’ve been with South Sydney all my life.”

The enduring appeal of South Sydney beyond The Burrow has become somewhat of a fascination for rugby league fans. The popular Twitter account Random Souths Guy spots jerseys all over the place, while even federal Opposition Leader Anthony Albanese, a genuine tragic, was using the hashtag on Saturday to post a photo of his dog in the cardinal and myrtle.

There was someone in a Souths jersey at the AFL grand final in Perth and a healthy sprinkling at the recent NRL finals double-header in Mackay, even if the Rabbitohs were enjoying the week off.

You could spot one at MetLife Stadium in New York of late, as well as at a rugby match between Coventry and Wasps in Britain. Obviously, there was a Rabbitohs jumper at this year’s A-League grand final in Melbourne.

And who could forget the Random Souths Guy classic when someone in a red and green jumper proudly posed with Cronulla’s Chad Townsend and the Provan-Summons Trophy after the Sharks had won the 2016 premiership.

The Rabbitohs have about 4000 paid members in Queensland and about 3500 of those are in the south-east, the Skewes family of Kalbar among them. And there are an official group of supporters, Queensland for South Sydney, made up of expats and locals, many of whom will be in the stands at Suncorp Stadium to witness what they hope will be premiership number 22 for the club.

Kathi Searle was one of the founding members of the group. She was born and raised in Bexley in Sydney and moved north in the early 1980s. The love of the Rabbitohs moved as well, and she remembers club legend John Sattler gracing them with his presence when the organisation formed.

“It all started when we got kicked out of the competition. A few of us went down to Sydney to march, and we didn’t really know each other at that time. Jack Saunders was a journalist, and he put an ad in The Courier-Mail that we were going to gather all the Rabbitohs supporters [in Brisbane and surrounds],” Searle remembers.

“That was in 2002 when we were back in the competition. John Sattler showed up to our first meeting, that was at the Terminus Hotel in Brisbane. We even organised a bus down to the first game back. It was a long trip home.”

Searle used to sneak into Redfern Oval as a child, and has no doubt whatsoever as to the result on Sunday as the Rabbitohs try to find a way past the battle-hardened Panthers.

“We’ll win because we’ve got the passion. And we never say die,” Searle said. “Those guys want that more than they’ve wanted anything.”