Trent Robinson’s $150,000 Mercedes has been stolen from his Waverly home during a brazen robbery.

The Roosters coach – who only recently returned from his side’s defence of its World Club Challenge title in the United Kingdom – discovered his blue, 2019-model Merc station wagon was taken on Wednesday while he slept. Police have circulated images captured on CCTV footage in a bid to apprehend the culprits. 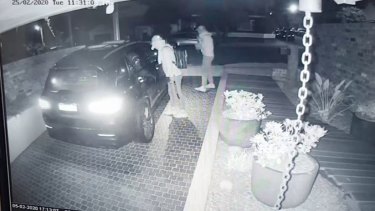 Robinson is an ambassador for Mercedes and he has spoken at events about his experiences as part of his role.

“Police are appealing for information after a high-performance vehicle worth $150,000 was stolen from Waverley,” according to a NSW Police media statement.

“About 8am Tuesday (25 February 2020), the homeowner found the home on Varna Street, Waverley, had been broken into while the family were asleep upstairs. A handbag and car keys were missing, along with the family’s Mercedes GLC63 that was parked in the driveway.

“Officers from Eastern Suburbs Police Area Command attended and established a crime scene, and an investigation is underway.

“The men are described only as wearing hoodies and gloves.

“Anyone with information about this incident is urged to contact Crime Stoppers: 1800 333 000 or https://nsw.crimestoppers.com.au”

Robinson’s Roosters have been one of the most dominant sides of the modern era, taking out the last two premierships. They are attempting to become the first team to win three straight grand finals since the great Parramatta teams coached by Jack Gibson achieved the feat in the early 1980s.