The NRL’s younger players are looking to benefit from the current COVID-19 situation as the latest outbreak continues to wreak havoc across pre-season.

With the NRL still scheduled to start in March, teams are being forced to train with as little as half their extended squad as players continue to test positive to the virus.

The Brisbane Broncos have had 16 players and three members of the club’s football staff test positive, including hooker Jake Turpin.

Emerging hooker Cory Paix said he was eager to capitalise on the absence of first-teamers from the training field to prove he is capable of being the club’s starting No.9.

Paix – known to his teammates as Sonic due to his speed – switched from playing halfback in the juniors and believes his time in the No.9 spot has reinvigorated his love for the game.

Paix and Turpin are close friends, with the youngster eager to challenge his mate for the spot.

“Whatever we can do on the training field and try and fight for a position, I think it’s only going to benefit the team,” he said. “I am definitely getting a lot more reps there, it certainly does help. Going into trials, it’s only going to help me.” 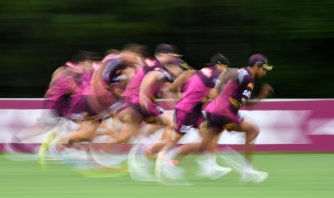 The Broncos’ pre-season preparations have been hit hard by the COVID-19 outbreak.Credit:Getty

Paix said new halfback Adam Reynolds has been vital in helping the side weather the COVID-19 storm.

“You can see why he’s the player he is. There’s a clear mindset going into training when you know you’ve got him by your side,” he said.

In Townsville, about 10 Cowboys players are out of action due to COVID-19 with the squad struggling to put enough troops together to run full plays.

“There are going to be boys that might not have gotten a run this year, getting a chance,” McLean said. “For some of the young boys, it’s a confidence booster knowing that they need to train their best, and do their best preparation for this season, because they might get a run.”

The comments come after Australia Rugby League Commission boss Peter V’landys spoke about the issue on 2GB radio on Thursday, reassuring players the competition would go ahead this year.

“We believe we have the systems in place to avoid disruption and we’re lucky in a sense that it’s happening now and we’re learning from the experience,” V’landys said.

“I believe in our system and we’ve already got 30,000 antigen tests, and it will work and minimise the disruption.

Last week, the Penrith Panthers confirmed via a statement a significant number of their players and staff were currently self-isolating, forcing the club to push back the resumption of pre-season training.

Canterbury also confirmed a number of players were in isolation after testing positive while more than a dozen Dragons players and staff also have COVID-19.

The Eels, Tigers, Bulldogs and Sharks have also registered positive cases among their players and staff with the NRL.

“It won’t be a hard bubble this year, it will be what we call a soft bubble. The players will be able to go to places but they must use common sense,” V’landys said.

‘You don’t want to be playing touch’: Morris

Latrell was moved back to centre. But Daley says his fullback switch was a success