North Melbourne showed they are mounting a charge at the AFLW finals with a strong win over expansion club Richmond on Sunday.

The Roos bolted out to a 40-point half-time lead en route to a 56-point win over the Tigers at IKON Park on Sunday, and improved their record to 2-1 this season while Richmond drop to 0-3. 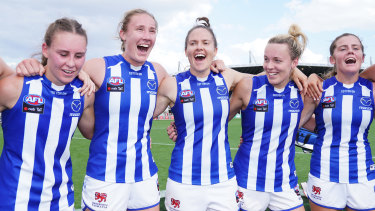 North Melbourne were decisive and brutal in attack at times, and the Tigers looked powerless to stop them as the AFLW record-winning margin looked under threat before a much more competitive second half.

Roos skipper Emma Kearney was outstanding along with midfielder Ashleigh Riddell as their side dominated across every part of the ground, almost doubling the Tigers in effective disposals and several other key statistics. 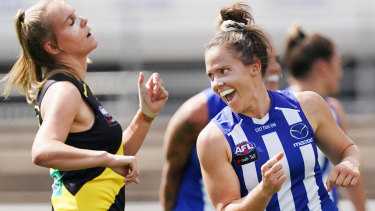 Roos coach Scott Gowens said his side took a step forward in making such a strong start including a five-goal-to-nothing second term.

"You could see it coming and I felt this week we could do it a bit longer and got 80 per cent of the first half right," Gowans said.

"We got a bit of a run from Richmond's turnovers and that’s the main thing in getting opportunities to go forward."

Richmond's big signings Katie Brennan, Sabrina Frederick and Monique Conti have faced some criticism due to their side's winless start.

But the Tigers found something after the break as they started to get more from their midfield and managed to start pushing the ball into attack.

Frederick was the beneficiary as she out-bodied Vivien Saad from a ball-up in Richmond's goal square, then executed an overhead snap with her back to goal to break the Tigers goal drought. 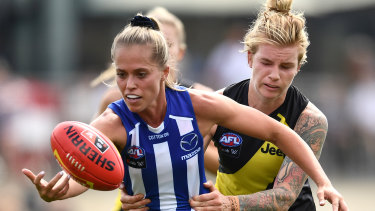 Brennan followed up with a classy, running goal soon after which saw her kick bounce just past the defender on the goal line.

"I think the third quarter showed glimpses of the football we want to play and the side we hope to become," Hunter said.

"For us it's about getting that consistency across the game."

Gowans liked the way his side reacted at three-quarter time to Richmond's improved showing as they were comfortably in control in the final term.

The Roos want to challenge for the AFLW premiership but whether they are good enough remains to be seen.

"I feel like we still have a step to go with a few areas of our game and when we get that right, then who knows," Gowans said.

"We aren't quite there yet, but we are a lot closer than we were last week."

Frederick does a De Vanna

Richmond star Sabrina Frederick was struggling for chances to score but she took her moment in the third term from a ball-up in her side's attacking goal square. Pulling in the ball with her back to goal, she powered a bicycle kick over her shoulder and into the goals. It was a finish that would have made Matildas star Lisa De Vanna proud and should be a goal of the year candidate. 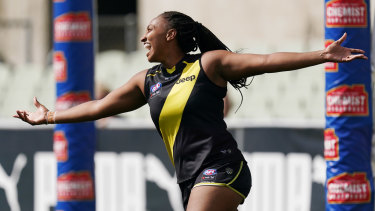 North Melbourne midfielder Ashleigh Riddell was untouchable in the first half notching up 17 of 21 possessions as the Kangaroos built a 40-minute lead.

Riddell was finding the ball in all areas and benefiting from extra possessions and field position due to her side's defensive pressure.

For all Richmond's struggles in the first half, they still had their cheer squad and supporters on side with the Tigers faithful gathered around their team's tunnel and roaring for them as they went in at half time down 40 points. The Tigers partly repaid that faith with a much more competitive second half.

London Irish's final game of the season at Bristol is CANCELLED 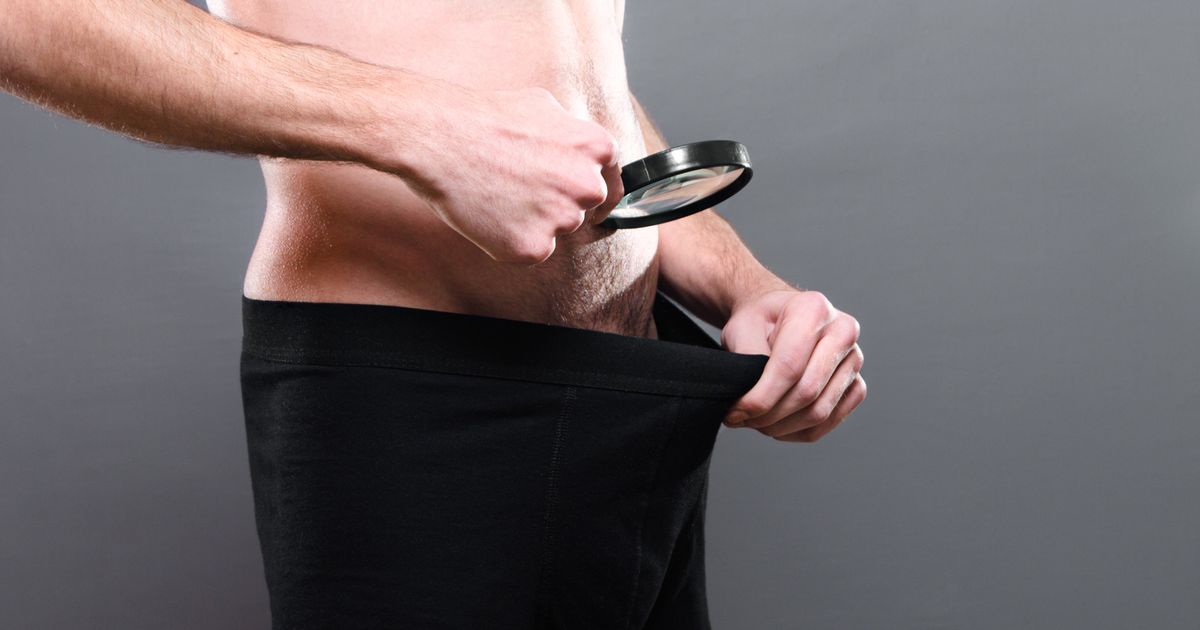