Gold Coast were caught short this season in the ruck department when all their candidates – Jarrod Witts, Zac Smith and youngster Matt Conroy – were injured at once.

Richmond coach Damien Hardwick even suggested loaning Samson Ryan to the Suns, which was a bit of shock to poor old Samson who had only just escaped the Sunshine State via the national draft.

The Suns weren’t the only team to battle, with Carlton and the Western Bulldogs, at times, looking at their list and finding all the rucks in casualty. 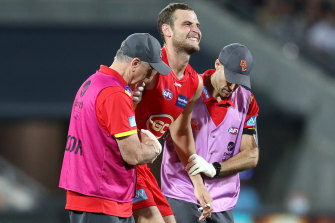 That’s why when the trade period rolls around the ruck merry-go-round spins again, as most clubs now want to take four ruckman into a season, which ideally includes the first ruckman, a ruck-forward, a back-up ruck and a developing ruckman, maybe two.

Seven ruckmen were selected in the first 18 picks in this year’s mid-season draft as the “talls wanted” sign went up at several clubs, showing that the demand remains ever present.

In this AFL trade period, Collingwood’s Max Lynch, Geelong’s Darcy Fort and Hawthorn’s Jonathon Ceglar’s moves are potentially reliant on each other while Sydney are keen on Port Adelaide’s Peter Ladhams and St Kilda are interested in North Melbourne’s Tristan Xerri.

Collingwood’s Mason Cox is in limbo, wondering whether Lynch’s move helps his chances of a new contract at the Pies, and delisted Blue Levi Casboult holds on to the dream of extending his career as country clubs hover for his services. The Giants, meanwhile, are hunting Fremantle’s Rory Lobb – a player some would prefer to describe as a forward. 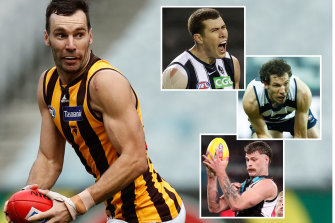 Jordon Sweet re-signed with the Western Bulldogs after looking at the market while Richmond’s Callum Coleman-Jones went to North Melbourne and Tiger tall Mabior Chol headed to the Suns.

The situation involving Lynch, Fort and Ceglar is most intriguing as the Hawks circle Lynch while they wait for the Cats to commit to Ceglar, but the Cats only really want to if Fort is so keen to get to the Lions that they would be better served letting him go despite being contracted.

The Cats are sticking to the line that Fort is more likely to stay than go while Ceglar is less likely to arrive, but the decision remains far from final, stalling the merry-go-round. The Hawks don’t really want both Lynch and Ceglar on their books while the Magpies keep Cox – who is not attracting much interest – waiting to see what happens.

Port Adelaide and Sydney will enter a dance over Ladhams – who has a year remaining on his contract and was a regular in Port Adelaide’s team from round nine until the season ended in the preliminary final – as Port would like a first-round pick for him.

The Swans, who have veterans Tom Hickey and Callum Sinclair and rookie Lachlan McAndrew, could do with Ladhams, who is 23, but they won’t want to hand over a first-round selection for him.

The going price historically for ruckmen who change clubs has been a third-round pick or a late second-round pick, with Braydon Preuss, Marc Pittonet, Hickey, Toby Nankervis, Witts and Darcy Cameron around that mark.

It’s why North Melbourne thought the Tigers might accept pick 40 for Coleman-Jones, a deal that eventually cost them 40, Robbie Tarrant (who could have left as a free agent anyway) and a future second-round pick for a future fourth-round pick and selections 42 and 47, as the player knew he couldn’t leave the Tigers empty-handed after what they had done for him.

He joins the ranks of second-club ruckmen that very few avoid over careers that can last a decade without getting close to 10 senior games a season, the joke being that the back-up ruckman becomes more valuable at trade time given the fewer senior opportunities they have had to be exposed.

If the next three days pan out how we expect, Fort will be a Lion, Lynch a Hawk, Ceglar a Cat, Ladhams a Swan, Lobb a Giant and Xerri a Saint.

In this all or nothing rucking business, the merry-go-round will eventually crank into gear for another year and the Suns will hope they don’t suddenly fall short ever again.