The best way for a rugby fan to watch league? Intermittently.

That’s not being facetious – far from it. But if you watch league twice a week without fail for, say, 20 years, the changes in the game become less obvious.

But if you watch it once or twice a year, particularly over the past five years, you can’t help being struck by what the game has become.

That was the case with the State of Origin this week, when league’s improvements compared to rugby’s failings were evident. If rugby bosses watched that match and came away thinking that their game was on the right track, I have some crypto and NFTs to sell them.

Let’s get one of the big talking points out of the way early – the concussions – because rugby types could fall into a trap here by thinking the 15-man code somehow exists on a higher moral plane. Yes, the early concussions in the Origin game were confronting, and Tino Fa’asuamaleaui’s swinging arm tackle should have been more heavily scrutinised, but look at the head injuries in the Wallabies-England series.

Jordan Petaia shouldn’t be anywhere near a field for the next three weeks after his heavy blow last week, while Allan Ala’alatoa also copped a shocker in Perth. Three England players are already out with concussions. This is the game we follow. 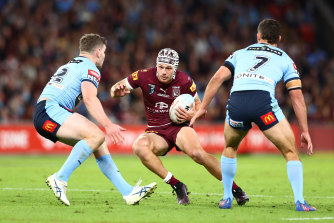 Kalyn Ponga was able to show off his skills in the Origin decider in a way he would rarely be able to if he ever realised his rugby ambitions.Credit:Getty Images

So, what is league getting right that rugby is getting wrong?

I think of it this way: sporting contests are decided by three main factors: Players, coaches, officials.

I would strongly argue that Origin was decided by those factors in that order, and I would further argue that that is the way it should be.

Rugby? On any given day players float between first and third on that list. They certainly aren’t guaranteed to be first and at times this year it has felt that it has taken something extraordinary for them to depose either the match-day officials or the huge influence of coaching/analysis to be the No.1 factor. 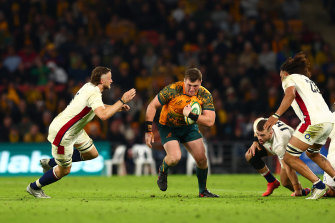 Rugby has abandoned the idea of being a game for all body types and has become a 23-on-23 clash of behemoths.Credit:Getty

Ultimately, World Rugby has to take responsibility for this. It has allowed a situation where rugby has become a game in which 23 behemoths crash into each other during about 35 minutes of ball-in-play time. No wonder there is so little space, or so much room for coaches to have oversized influence with the patterns of play they can impose. Accordingly, in a contest where it has become too easy for sides to cancel each other out, match officials – and the manipulation of officials – have become as important to the outcome of a given game than the players themselves.

The use of tactical replacements is the other issue.

When I have watched league over the past five years – and again, intermittently is the key word – the size of the athletes has been noticeable. They’re not giants: far from it. Sure, big men still play the game, but can you imagine Valentine Holmes trying to play centre in rugby? He’d be giving away 10-15kg to every other midfielder in Test rugby.

Rugby has become, above all else, a collision game: decided by who can assemble the biggest players to relentlessly ‘win the contact’.

I don’t want to get into the debate about league’s rule changes, but it is plainly evident to my eyes that they have introduced fatigue as an absolute non-negotiable. And what comes with fatigue? Space. And what comes with space? Players like Kalyn Ponga actually being able to use their skills – the same skills that rugby players possess but all too rarely are given the chance to use.

Rugby has become, above all else, a collision game: decided more often than not by who can assemble the biggest players to relentlessly ‘win the contact’. In the past decade or so it has been decided that 118kg for a tight-head prop is not enough – they must be 125kg-135kg, safe in the knowledge that once they actually start showing signs of fatigue they can be replaced by another human of the same dimensions, and the collision clock can be reset to zero.

Other lessons from league exist, too: particularly in fan engagement. Can you imagine rugby league bosses allowing the Wallabies to remain on the east coast when there were 10,000 unsold tickets in Perth for the first Test?

It was a mistake by Rugby Australia to lock the Wallabies away in a camp, and in return they have been rewarded with a series of soft-tissue injuries.

But the game has bigger problems. World Rugby would probably point to the July Tests, and the proximity of the top eight test sides, as proof that the game is in rude health.

After watching Origin this week, they shouldn’t be kidding themselves.

Raiders have most to lose from Storm resting players, but Stuart’s a fan