Roosters NRL fans have a chant where they bellow the word, “cheats”. When I heard it, I thought, that’s a bit rough on your own team but good on you for your honesty and integrity. They were showing admirable fellowship with all the other league followers who think the same thing. Next the Roosters will be calling themselves the Rorters and the Chooks will be the Crooks. Then I realised the word they were chanting was not “cheats” but “Easts”. Oh well, so much for idealism.

This is not to single out one club (although Matthew Johns recently fell off his chair laughing when Todd Payten told him he had, as a player, been forced out of the Roosters by “salary cap pressure”. When he regathered himself, Johns said, “You’re the only Roosters player in history that’s happened to”). But when the question of the week is why there are so many lopsided NRL matches at this time of year, you don’t have to look far past those lucky teams that can stockpile three of the game’s top present and future fullbacks – James Tedesco, Joseph Manu and Joseph Suaalii – and still, just like an Origin team, manage to squeeze them all in.

The whole league universe fell off its chair when ARL Commission boss Peter V’landys said a few weeks ago that he didn’t want to see clubs “buying a premiership”.

In reference to the game’s ridiculously late transfer window, which enabled the Roosters to recruit Matt Lodge and Oliver Gildart and the Storm to “borrow” David Nofoaluma – all within the salary cap, lol, V’landys commented: “We don’t want to see that they go and buy positions that they need so close to the semi-finals. That’s not in the spirit of the game.”

You wonder what game V’landys has been watching for the past five, 10, 50 years. Clubs buying premierships is not just in the spirit of the game, it is its heritage distilled to its purest essence. Manly used to buy premierships before the salary cap, and everyone still hates them for it. Canberra held onto their early ’90s stable of superstars with questionable transfers, Canterbury and Melbourne were caught purchasing premierships with brown paper bags in the 2000s, the Roosters somehow managed to fit Sonny Bill Williams under their salary sombrero in their victorious 2013 season, and Penrith winning a title in 2021 with home-grown talent just makes them the exception that proves the rule, and they only got there after finding Tevita Pangai in an op shop. If buying premierships is not “in the spirit of the game”, it’s certainly in its DNA.

Since the Todd Greenberg era, the NRL has been promising a root-and-branch review of its rooted salary cap system, but other priorities keep overtaking it. The delay is understandable but also raises the question of whether running a fairer competition is a priority for the NRL at all. 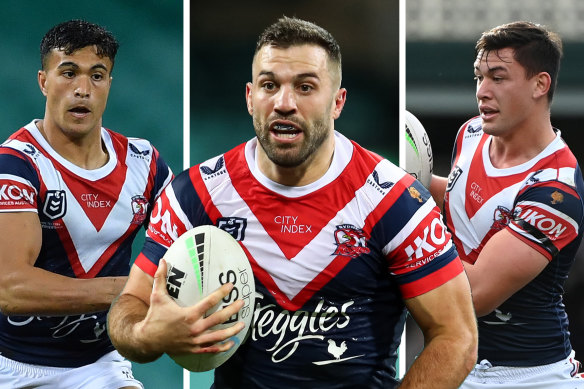 In recent rounds, some of those chooks have come home to roost. V’landys has recognised the problem of blowouts in games between penthouse and outhouse teams. The also-rans get blamed for giving up, their minds prematurely on Jetstar flights to Bali. “Playing for pride” doesn’t seem to be cutting it at Manly. Newcastle’s season got jammed down an S-bend. Few seem to notice the bleeding obvious, which is that the blowouts became routine once top teams were allowed to pillage the lower teams for their talent.

Why fix it? There could be an argument in favour of inequality. Why shouldn’t outstanding clubs be further rewarded for their excellence? Brandon Smith is going to the Roosters next year for $200,000 less than he could take at the Dolphins. If he’s already earning more than $500,000, an extra two hunjie is a reasonable trade-off for a premiership ring. If the league wants to reward its best-performing clubs and urge the others to emulate their standards, maybe it should drop the fancy-dress cap and just let ’em rip.

The NRL’s failure to change its cap, while inconsistently policing it, creates a positive feedback loop that entrenches unfairness. The game has been strict on penalising salary cap breaches by St George Illawarra, Gold Coast, Parramatta, Canterbury, and Manly who, five years ago, were the last club to rort the cap (lolol). The common factor? Each team was low on the table. Lowly clubs get caught in a trap of senseless overspending on sub-premium players, and in desperation they find more money to spend on still more mediocrity. Next year, the cap will rise from its current $9 million plus, so the top clubs will be better able to lure top players and the poorer clubs will be better able to lure poor ones.

There is a solution: an independent, points-based rating of players, cut free from the actual (or fabricated) salaries they earn. Do what you want with money, but each club can only spend a certain number of points on its top 25 players. To manage the change, allow each to reserve half a dozen marquee players currently on their books and then have an open auction for the rest.

It works with cricket’s Indian Premier League, where the big talent is spread across the franchises and the ladder doesn’t rinse and repeat each year. It would also stop the silliness of a Ryan Papenhuyzen being valued as two-thirds of a Luke Brooks, which is where we find ourselves at present.

The fundamental unfairness perpetuated by the broken salary cap is pretty much the only big thing that’s wrong with the NRL right now. The game’s entertainment value is better than ever, thanks to imaginative coaching, the sublime skills and toughness of the players and some good pragmatic decision-making by V’landys, Andrew Abdo and the administration. On the surface, things are chugging along well. Little wonder there’s no great incentive to disturb those favoured clubs with their nice “cap management”.

On the other hand, it’s not much consolation for the other half of the fan population who know, before round one, that their team has no hope because the salary cap has failed in its purpose of spreading talent across the league.

You could say the NRL has only one job – to lay out the rules to provide a fair competition and to update and patrol those rules – and it has failed. But when the happier half of the fan base is getting revved up about the finals, that kind of criticism is just class jealousy. Losers complaining about winners, the poor against the rich, the New Fibros against the New Silvertails, the downtrodden proles seeking a better deal – that would be against the spirit of the game, wouldn’t it.