Home » Rugby » Run home: Where contenders stand in the race for the eight

The race for the eight is well and truly on as we head into the home stretch of the AFL season, with six teams the likely contenders for seventh and eighth places.

Reigning premiers Richmond have stumbled in recent weeks and West Coast’s shock loss to North Melbourne on Monday night capped a poor stretch for the Eagles. Meanwhile, the Saints are surging, Fremantle have moved into the eight and the Bombers are threatening with strong percentage.

So can your team make the finals? Our experts have their say.

Shapes as being a line-ball call. Care of their biggest ever win over Hawthorn, they sit in seventh spot but only ahead of West Coast and St Kilda on percentage. They have the benefit of having four of their final six matches at Optus Stadium, beginning against Geelong on Thursday night, but offsetting this is that these are against entrenched top-eight sides or those seriously in the hunt. Importantly, Nat Fyfe is back in fine form, David Mundy has been tireless while Sean Darcy is a force in the ruck. 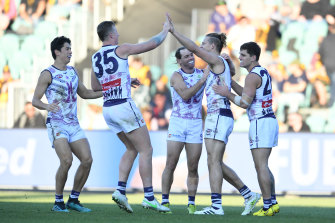 Fremantle thrashed the Hawks to bust into the eight.Credit:Getty Images

West Coast’s last two performances – a drubbing at the hands of Sydney and an upset loss at home against bottom-of-the-ladder North Melbourne – tell you all you need to know. The midfield is too reliant on Nic Naitanui brilliance, the overall pressure the side is applying is way too low and this usually skillful and ruthless side is severely lacking confidence. Adam Simpson has put regular starters on notice that they could be dropped. But if they are to make the eight, it will all come down to their next three games, which is fairly favourable: Adelaide, Collingwood and St Kilda. Many of their stars have only recently returned from injury and hopefully now, with two games under their belts, can start to hit their straps. Josh Kennedy is still playing well at full forward, as is Shannon Hurn at the other end. With these bookends and Naitanui in the middle, it’s hard to completely write off the Eagles just yet.

The Saints headed into their mid-season bye with their season appearing all but over on the back of a capitulation to Adelaide in Cairns. But remarkably, Brett Ratten’s side has found a pulse – and then some – winning three matches in a row on the back of defensive steel and the welcome return of several key players. The tandem work of Paddy Ryder and Rowan Marshall – the best combination to hit St Kilda since fish and chips – has been crucial to the resurgence. St Kilda are still hamstrung by their poor percentage, a vestige of several shellackings in the first half of the season, but their destiny is in their own hands. Perhaps counterintuitively, the Saints’ worst football this year has come at Marvel Stadium, where a lack of outside run and class has been badly exposed, particularly by Essendon and the Western Bulldogs. So strangely enough, the true test of whether the Saints are back may come on Saturday night against Port Adelaide, a side that has generally beaten the also-rans this year. 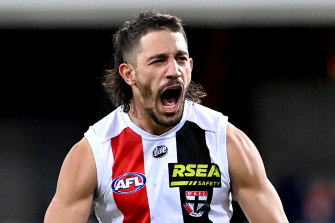 Ben Long’s Saints have been on a roll with three wins on the trot.Credit:Getty Images

Inconsistency has effectively blown the Giants’ best chance of consolidating a spot in the final eight. A draw to North Melbourne and upset losses to Hawthorn and the Suns in between wins against Melbourne and Carlton have left them two points behind Fremantle, West Coast and St Kilda. Being on the road due to COVID-19 has not helped their cause but Sydney have stopped that factor from being used as an out. Two unsigned stars, Jacob Hopper and Josh Kelly, are carrying their midfield and they will be without key running defender and playmaker Lachie Whitfield for their vital clash against the Swans this week in Ballarat. If they beat the Swans they remain a realistic finals hope with matches against Essendon, Port Adelaide, Geelong, Richmond and Carlton to follow. Lose, however, and they should begin thinking about next year, having conducted a fighting campaign with a list that would achieve a par result if they made finals. 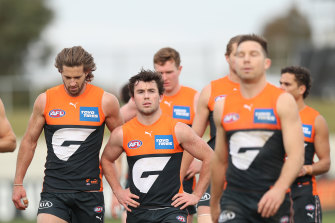 The Giants have been inconsistent this season.Credit:Getty Images

The Bombers, written off as a finals contender for most of 2021 by most of us – and themselves not expecting to make it – have a serious shot at making the eight now, as teams above continue to slip on banana peels. Their run home is pretty favourable – games versus North and the Giants are very winnable; mtch-ups with the Swans and Dogs are tougher. They’d be disappointed to lose to either the Suns (albeit that’s away) or Collingwood at the end with a finals berth on the line. Their relatively strong percentage means there’s a chance they could make it with 11 wins, requiring four victories from six games, although that still relies on the likes of St Kilda, Freo and the falling Eagles winning only half of their six, because five wins might be a stretch for a young side. Very much in the mix. 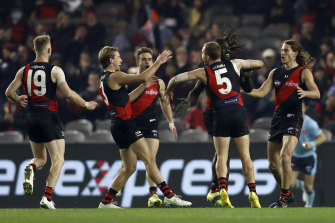 The Bombers have a good percentage and are exceeding expectations this season.Credit:Getty Images

At three-quarter-time on Sunday, the live ladder had Richmond seventh.

That last quarter not only dropped them to 12th and six points outside the eight with a weaker percentage, it also engendered a sense of a downward spiral for the season that they could not stop, coming as it did after the loss to St Kilda. Their midfield is undermanned. Dustin Martin has spent more time forward, Dion Prestia and Shane Edwards are injured, Toby Nankervis has also been missing and Trent Cotchin is down on form. On paper they should have won their last two games so trying to get a read on likely wins in the run home is fraught. Right now you would have to think they lose the next two against Brisbane and Geelong, which would leave them further adrift and unlikely to have games left to make up ground. What they have always had is an edge in belief – that they can win from anywhere and beat anyone. Do they still have it?