Melbourne coach Simon Goodwin praised his team’s willingness to eke out victory but counterpart Ben Rutten was left to lament an undisciplined act by Devon Smith, on a night the Demons posted a grinding 11-point win.

The top-of-the-table Demons may have managed only nine goals but the Bombers could not capitalise, managing only two goals in the final term. The win was the Demons’ 12th of the season, and appears to have them a lock for a top-two finish.

“I thought we got back to the way we normally defend. We were pretty disappointed after our Collingwood game before the bye in that phase of the game,” Goodwin said. 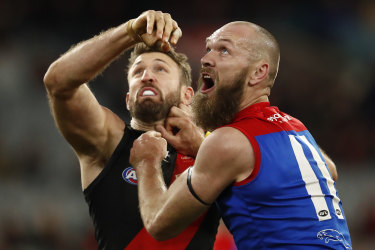 Cale Hooker of the Bombers and Max Gawn of the Demons compete during the round 15 match.Credit:

“I thought against a really strong offensive team who are in form with some pretty dangerous players, I thought we defended in a good manner.”

Midfield hardnuts Clayton Oliver (34 disposals) and James Harmes (27) were strong in the contest, while vice-captain Jack Viney was a welcome return, as the Demons rectified their centre-bounce clearance issues.

Defensive pillars Jake Lever and Steven May ensured the Bombers struggled to mark inside attacking 50, while Michael Hibberd curbed Jake Stringer, the latter managing only one goal a week after his heroics over Hawthorn.

“If you look at our games through the whole of the season, there have been periods where we have had to reset, stay calm and find a way to get a victory, and a lot of our games haven’t been big wins,” Goodwin said.

“They have been narrow wins and wins where we have had to grind our way to victory. That’s the way we play, that’s the Melbourne way. I was really proud of our players, the way they went about it, especially the defensive side.”

The Demons opted not to field Ben Brown nor Sam Weideman as a tall making option alongside Tom McDonald but Goodwin said the door was not shut on the pair.

Veteran Nathan Jones was recalled as the medical substitute but was not used and will line up for Casey in the VFL on Sunday.

The Demons face Greater Western Sydney at the MCG on Saturday, while the Bombers face a trip to Geelong on Friday night for the first time since 1993.

Rutten said the Bombers, a game outside the top eight, were bridging the gap with the best teams but composure and an ability to stick to their method of play was where more “growth” was needed.

A lack of composure was shown when a 100-metre penalty was paid in the third term when the Demons took control with four goals. Archie Perkins conceded a 50m penalty on the wing but that turned into a certain goal for James Jordon after Devon Smith expressed his frustration to the umpire as he ran back and conceded a 50m penalty.

“It was a double 50, really, but there was probably a disciplinary one there, the secondary one,” Rutten said.

“I have already spoken to Dev about it. He is aware of that. He got distracted a little bit by the umpire and it cost us. He is aware of that. It’s an area of his game I think he is improving. He is getting better and better at that discipline, to be able to stick to his best footy for longer.”

The Bombers’ faithful were angered by several umpiring decisions through the night but Rutten did not blame any calls for the defeat. However, he added: “I think we just want to make sure there is consistency, the players will adapt, the coaches will adapt, so long as there is consistency in the umpiring and the interpretation and, if the free kicks are there, they should be paid. I think that is the most important bit.”

He said he would not put in a call to umpires’ boss Dan Richardson for an explanation.

Rutten praised the influence of midfielders Zach Merrett (41 disposals) and Darcy Parish (37) but Goodwin and Demons’ wingman Angus Brayshaw noted many of their touches had been in the Bombers’ defensive half, curbing their influence.