Port Adelaide’s long climb back up the ladder is gaining momentum after breaking St Kilda hearts with a heart-stopping victory in Cairns on Saturday night.

In a game where both sides struggled to convert in front of goal, it was fitting that the winning score was a behind, via the boot of Robbie Gray in the final minute.

Gray, who described the match as one of the hardest he has played in his 259-game career, was instrumental in Port’s revival, kicking two goals in a low-scoring encounter as the Power prevailed 5.13 (43) to 4.18 (42). 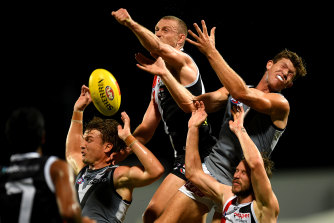 This was a game the Saints should have won but didn’t. They lost not due to any shortage of effort or application, but they could not seize their chances. 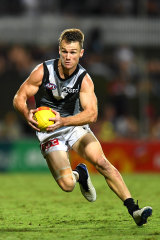 Force: Robbie Gray described the match as one of the hardest of his career. Credit:Albert Perez, Getty Images

Bad kicking has stymied the Saints – and it did again here. From the moment Jack Higgins kicked the Saints’ third goal, they managed 1.15.

Max King will remember this game wistfully. Though his miss in the first quarter was worse, had he kicked truly from 30 out early in the last quarter, the Saints would have been 13 points clear in a low-scoring game.

King gave the Saints the lead in the closing minutes only for Zak Butters to level up with a sprayed shot on the counter.

The Saints dominated everywhere but the scoreboard in the first half. Tougher and harder in the greasy conditions, Brett Ratten’s men owned the ball and had the game played predominantly in their forward half.

Worry was etched across Ken Hinkley’s face though for all the Saints’ control they had not short-circuited the Power.

When Ollie Wines kicked Port’s first goal of the night – and their only major in the first half – they trailed by just 13 points.

Port did not have the game back on their terms but, just as importantly, nor did the Saints, whose ball movement broke down as the game wore on.

It has been a tough return to senior football for Aliir Aliir, but there are signs the star defender may not be far away from rediscovering his best after surgery on an ankle syndesmosis injury. Put to the sword by Charlie Curnow in his return game, Aliir was also quiet last week but for long periods he played with the assurance and judgment that has made him one of the best defenders in the league. It’s worth noting Aliir missed just three games, and not the five or six weeks Port initially believed, so the timing of his spike in form should not be surprising. 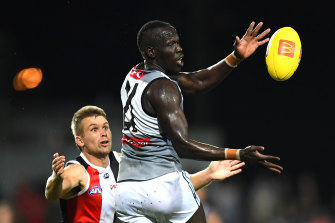 As a three-time All Australian midfielder, Travis Boak should be accustomed to being worn like a glove. This time he was wearing one on his left hand after slicing open a finger in a kitchen accident during the week. Such injuries are far from ideal in a sport where touch and feel is so important though the gloves would not have hurt him in the slippery conditions.

We’re only seven rounds in, but the casualty ward across the league is already chock-full of ruckmen. It’s not different at Moorabbin where injuries to Rowan Marshall and Jack Hayes gave the much travelled Tom Campbell an unlikely 55th game – and a debut in the red, white and black. Campbell did not have a big night, but he allowed the Saints to maintain their preferred structure. He cannot expect to retain his place if Marshall is fit but, at his third club and on an AFL list for an 11th year, he should know better than most that opportunities are never far away for rucks who can stay fit.