The Saints have marched into a semi-final appointment with Richmond, surviving a belated charge by a persistent Western Bulldogs side to win their first final in a decade.

The Saints had led by 26 points late in the third term and appeared to be cruising to a comfortable win, when the Bulldogs – inspired by a hitherto beaten Caleb Daniel and their revived onball unit – booted four goals to one in the final quarter to reduce the margin to the eventual three points. 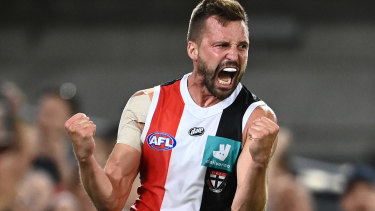 Lachie Hunter, Aaron Naughton, Tom Liberatore and – finally Daniel – booted the late goals that almost saw the Dogs pinch a match that had not appeared destined to be as close for nearly the whole second half.

The game was not safe until the Saints marked in defence at the very end, the momentum having shifted dramatically at the end as the Dogs owned the territory – a reality reflected in their 51 forward entries to 35.

In warm twilight at the Gabba, the Saints played for three quarters in a manner that matched their off-season recruiting splurge: they took chances, knowing that they had more to gain than lose in the circumstances.

The match was a throwback to finals of yesteryear, in that the difference was most evident in the big men – ruckmen and talls at each end – rather than in the swarm of mid-sized players clustered around the ball, where the Dogs more than held their own.

The Saints had tall targets in attack, two ruckmen – one of whom could be sent forward – and they clearly had a plan to move the ball quickly, to play and create one-on-one opportunities against an undersized Bulldog defence.

Paddy Ryder's experience and ability to take a grab up forward was telling, as was his ruck partner Rowan Marshall. Ryder, though, was injured at the end and off the field with what might have been a hamstring injury. He was in tears at the end.

The Saints took 21 contested marks for the match – the most in any game this season, in a number that reflected the tall man advantage.

Dan Hannebery, whose worth has been questioned since he crossed from the Swans, was another experienced hand whose finals nous was important.

Few players were more influential for two-thirds of the match than Saints' skipper Jarryn Geary, who was stationed forward and both negated and exploited Dogs' playmaker Daniel, booting two crucial goals. Daniel, though, fought back at the end and was one of his side's best.

The most spectacular player afield, however, was St Kilda's enormously talented 202cm key forward Max King, who ripped the ball from the skies in the first half to boot two goals and help the Saints gain an edge that was enough for them to hang on by their fingernails.

It's a shame that more teams don't take the approach that Brett Ratten's men took to this final, daring to move the footy and backing their team mates to win contests. This method meant the Dogs had to open the game as well in the last quarter, making for a more enterprising spectacle.

The Dogs had their share of the ball, but did not have the weapons in the front half that the Saints owned – Naughton and Josh Bruce. They were unfortunate to lose Zaine Cordy to injury in the second quarter.

The Saints edged ahead in the latter stages of the second quarter, when much of their drive came from behind the ball, as they took some chances – keeping the ball alive rather than allowing stoppages – and moving it swiftly forward, where they had a young colossus ripping the footy from the skies.

King's first half was one of the more exciting by a young key forward of recent times, when the tall forward frequently competes in two and three on ones and finds it hard to get a clean run and launch at the football.

The match featured a fascinating duel in St Kilda's front half, where Geary was matched with the Bulldogs' diminutive playmaker Daniel.

Twice, this saw Geary mark in contests one-out, creating the Saints' first goal of the match to Tim Membrey, via a handball into an open goal. On the other occasion, Geary missed a gettable shot on the half-time siren.

Bailey Smith was another indomitable Bulldog who did not give up and ran hard until the end, while the trio of Marcus Bontempelli, Jack Macrae and Lachie Hunter all accumulated and gave them drive.

At the end, it was a match symbolised by the Geary-Daniel match-up, which was almost a draw. Size counted.