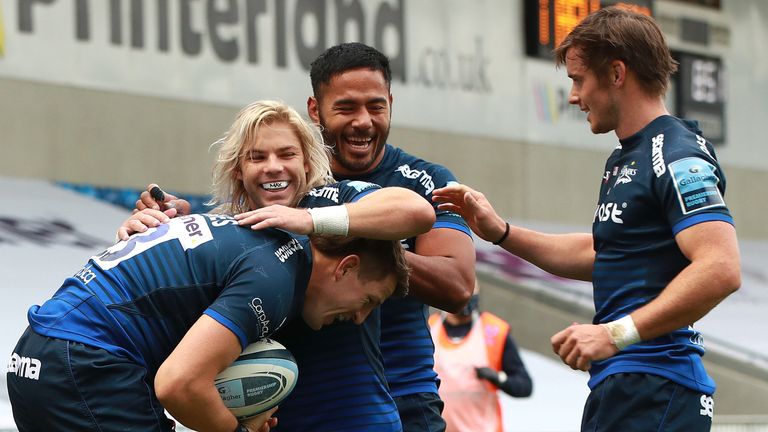 Sale moved up to second place, two points ahead of Bristol, with a second straight victory, while their opponents have now suffered back-to-back defeats – second in the table being significant as it will grant a home semi-final.

The hosts flew out of the blocks and a clinical opening half-hour from Steve Diamond’s side set the tone for a ruthless display from his experienced team.

Bristol struggled to cope with Sale’s early scrum dominance, with the Sharks breaking through after just six minutes as James went over from Daniel Du Preez’s neat pass and AJ MacGinty converted.

The visitors tried to muster a quick reaction but they were the architects of their own downfall three minutes later as a loose pass from a scrum was seized on by Denny Solomona.

The England international raced clear from halfway to score Sale’s second try, with MacGinty kicking the home side into 14-0 lead inside the first 10 minutes.

Pat Lam’s visitors did begin to make some headway, but Sale’s power on the counter-attack continued to be the decisive factor in the first half.

England centre Manu Tuilagi showed great feet to sidestep two Bristol challenges just inside his own half before feeding Jean-Luc Du Preez on the inside.

And, with Bristol unable to recover their defensive position in time, he found the rampaging Faf de Klerk for Sale’s third try, with MacGinty’s kick making it 21-0 after 22 minutes. Sale wrapped up their bonus point just after the half-hour mark as another Bristol defensive error was picked up by Solomona and he slipped in Sam James for an easy try.

Bristol gave themselves a lifeline just before the break. MacGinty’s risky pass was cut out by Alapati Leiua and the Samoan centre sprinted clear for their first try, with Tiff Eden slotting over the conversion.

However, any slim chance of a Bristol comeback was quashed by a ruthless start to the second half from Sale.

De Klerk’s low pass inside the 22 caught out Bristol’s defence and MacGinty fed James for his second try five minutes after the restart.

Despite striking a crucial blow to Bristol’s confidence, Sale were in no mood to slow down as the second half wore on.

‘Stressful’: Hiku opens up on decision to leave Warriors and return to NZ