Max Malins was Saracens’ magic man in tights as he became the first player to score two hat-tricks in a week, swatting Wasps aside.

Only fellow Saracen Francisco Leonelli had taken two triples in consecutive rounds, but his in 2008 against Leeds and Wasps came three weeks apart. 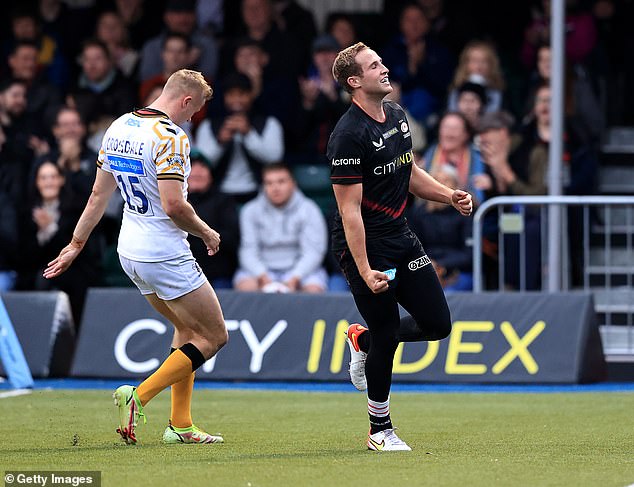 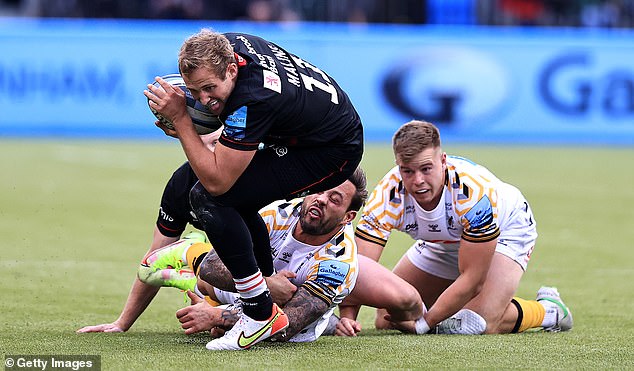 And Malins, 24, did it all in leggings – now permitted on plastic pitches – as Sarries notched 127 points and 18 tries in 160 minutes of league action across seven days.

‘The power of the tights! You’ve got to be careful! I knew I was going to get some stick for it, so had to put on a good performance didn’t I?,’ laughed Malins, who decided to wear them just before kick-off as he has healing cuts on his knees he did not want to re-open before he goes into England camp.

‘I brought them with me and saw that Jonny May had worn them on Saturday which opened the door for everyone. I saw it was a dry day so didn’t want to take the risk.’

Sarries boss Mark McCall was not just pleased with Malins, who now has 16 tries in 11 games including his loan stint at Bristol, but yet again singled out Billy Vunipola, dropped by England by a try-scorer here, for high praise.

‘How Billy didn’t get man of the match I’ll never know,’ said McCall.

‘Billy was unbelievable today, a force of nature in the first half. He gave us all the momentum, all the go-forward, imposed him physically, I thought he was wonderful.’ 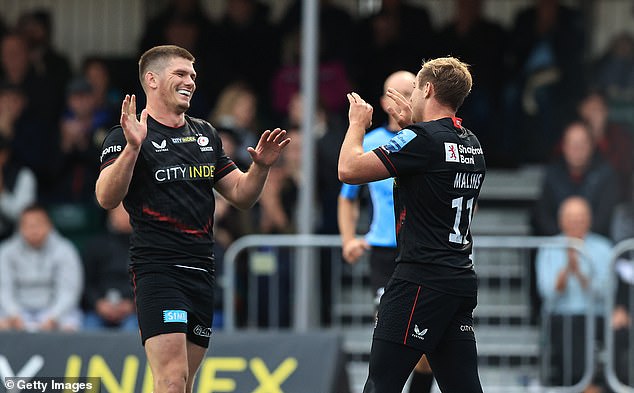 Malins  did it all in leggings, which players are now permitted to wear while on plastic pitches

When you realise that is also a list of all 23 of those not playing against Saracens – 15 injured, one banned and seven rotated – Lee Blackett’s task here hit brutally home.

How on earth, really, were Wasps meant to win against a fired-up Sarries who had just put 71 points on Bath last week?

Then add four more withdrawals during the first half – Will Simonds, Pieter Scholtz, Tom Cruse and Ben Morris – and the die was well and truly cast.

Sarries had no mercy for poor old Wasps. By half-time they led 27-3; two Farrell penalties to get them going, then Jamie George taking his fourth of the season to celebrate his England re-call. 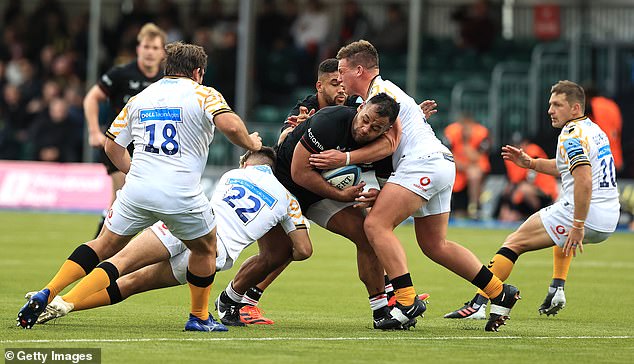 That score came after a delightfully simple move where Aled Davies popped to the rampaging Vincent Koch, he ran through a huge hole and then fed George to beat the last man.

After Wasps had temporarily stopped the one-way traffic with a Jimmy Gopperth penalty Sarries went conjuring.

Alex Goode pirouetted to beat Zach Kibirige in no space at all, then flung a spinning reverse pass inside. Nick Tompkins soon broke away, Sean Maitland took them close and then quick hands from Goode and Maro Itoje gave Malins his first.

Right on half-time Wasps knocked on five out from their line when stripping the ball in defence, Sarries belted the scrum and Billy Vunipola popped over for Sarries’ third.

Farrell converted them all and after the break Saracens kept coming, Malins soon scoring another on the left. 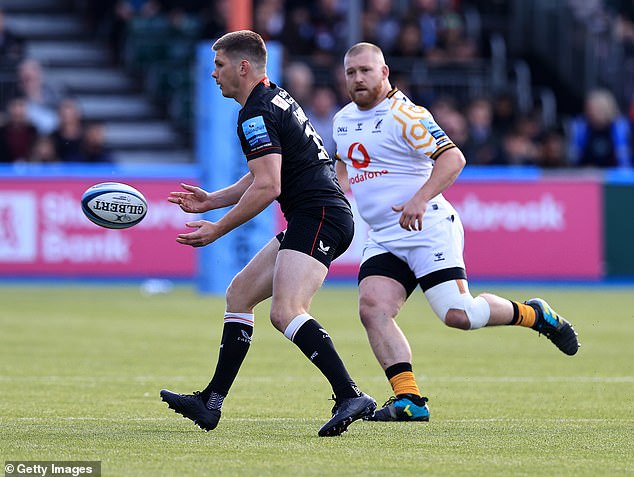 ‘Don’t let anything drop!’ Farrell roared to his side as Wasps attempted a belated rally; he would have been livid that then former Saracen Ali Crossdale was able to float a wide pass to Gopperth for a try.

The Kiwi had eight more Premiership appearances than all the other Wasps backs combined, further showing how light the visitors were.

But they did not give up. Itoje passed loosely near Wasps’ line next and the ball spilled away – Crossdale hoofed it long which set Kibirige against Farrell in a foot-race the winger won by miles, kicking on and regathering to score a try that Gopperth converted.

However Malins completed his second hat-trick in a week and then took a fourth when completing a superb one-two with Farrell.

Malins went off but the tries kept coming, Alex Lozowski next and then at the very last Ben Earl completed a 10-phase move while the clock was dead to confirm Saracens’ total and utter domination for the second week running.

‘It could have been worse,’ said Wasps’ Blackett – a thin straw to grasp.