Tom Opacic has a scar on each shoulder from the last time he pushed his body to play in an NRL final, but holds no fear of his dodgy hamstring repeating for a nightmare outing in Townsville.

Opacic has been a fixture on Parramatta’s revitalised left-edge this season playing 19 games outside Dylan Brown and Shaun Lane, but is racing the clock to play in Friday’s grand final qualifier against North Queensland.

The 28-year-old journeyman has been “sitting on the ice machine” through the night after suffering a hamstring strain against Canberra, with Marata Niukore on standby to switch to the centres should Opacic be ruled out.

Opacic knows all too-well how his desperate bid to turn out for the Eels could go awry, having played a disastrous 2016 final for Brisbane with one busted shoulder before dislocating the other midway through a loss to the Cowboys.

“That was 2016, I went in with a busted shoulder and ended up dislocating my other shoulder in a Justin O’Neill tackle,” Opacic recalled on Monday, with Alex Glenn shuffled into the centres to cover him that night after O’Neill had already scored two tries.

“That meant a double shoulder reconstruction that off-season and it wasn’t exactly fun. It can always go a couple of ways couldn’t it though. There’s the scenarios you have to toss up and think about, ‘Am I pushing it too hard?’ 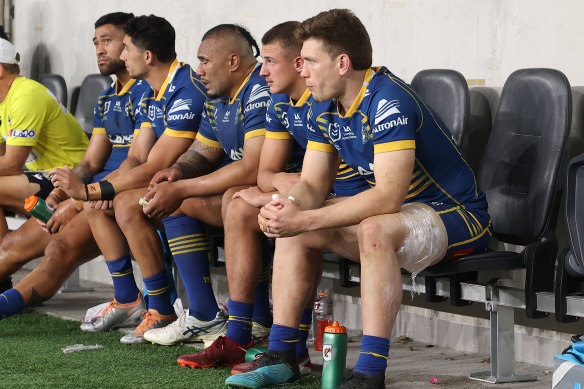 Opacic is one of few injury concerns for the Eels.Credit:Getty

“There will be a few sleepless nights, sitting on the ice machine. It feels alright, I have not done anything since the game except sit on ice for three days.

“Regardless of me moving on [to join Hull KR in the English Super League], this is the biggest game of my career. To miss it would be pretty heartbreaking. But if that’s the case and the boys win, I’ll be pushing bloody hard to get there for a grand final I promise you.”

Opacic arrived at Parramatta at the start of last year on a one-year deal and has played 40 games since, helping to shore up defensive frailties that have plagued Parramatta’s edges in recent years.

“I came here to revive my career and I feel like I’ve done that,” Opacic said. “I’ve probably played more than I expected when I signed that deal and I’d say I’m in career-best form since I’ve been here.

“Defensively on our edge I think we’re very calm and over the last six to eight weeks we’ve learnt how each other move defensively.

“I know that I can count on Dyl to make up an extra metre or two in pace because he’s so quick and that helps me with my decision making.”

‘I’d had a shocker’: Why Stuart understands the scrutiny Williams faces at Raiders

Call racism out to stamp it out, says academic