Defender Jayden Short upstaged a host of higher-profile teammates to claim the Jack Dyer Medal as Richmond's best and fairest on Monday.

Two days after finishing runner-up in the Norm Smith Medal voting behind superstar Dustin Martin, rebounding backman Short turned the tables on the 2017 Brownlow medallist and pipped him for first place in the count held on the Gold Coast. 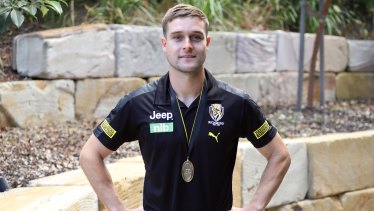 Short's 25 disposals and six tackles in the grand final, in which he also gained 771 metres for his side, capped an excellent season for the one-time rookie, who has enjoyed a dramatic rise across three seasons after being overlooked for the 2017 grand final.

Short, 24, played all 21 matches for the Tigers this season, averaging 19 disposals, five marks and 480m gained.

He topped the count with 53 votes to finish three clear of runner-up Martin, who placed in the top three of the count for the eighth time. Triple-premiership backman Nick Vlastuin was also rewarded for another stellar campaign, finishing third.

The prospect the back-to-back reigning premiers could remain in contention for years to come was boosted by the fact three players aged 22 or under finished in the top eight. Shai Bolton, another to star in the grand final win over Geelong, finished fourth, while Liam Baker was sixth and Noah Balta, the only first-time premiership player for Richmond on Saturday night, was eighth.

Having been squeezed out of the 22 for last year's grand final, Kamdyn McIntosh's year of resurgence ended with him finishing fifth. Dylan Grimes finished seventh, Kane Lambert was ninth, while skipper Trent Cotchin rounded out the top 10.

Jake Aarts, who was edged out of the side after the first week of the finals, finished equal 14th with Riewoldt.

"Under the Jack Dyer Medal voting system, all of the team's players on match day receive a rating from 0-5 based on their overall performance," the club explained.

"The match committee assesses each player's offensive, defensive and contest impacts on the game.

"After those game phases have been analysed, the 0-5 rating is given, as a joint match committee decision.

"Votes are not allocated for what the match committee deems a below-average performance."

Khabib to hold press conference in Moscow next week
Recent Posts
This website uses cookies to improve your user experience and to provide you with advertisements that are relevant to your interests. By continuing to browse the site you are agreeing to our use of cookies.Ok