Home » Rugby » Silk elected to Hawthorn board, expected to replace Kennett as president

Former AustralianSuper boss Ian Silk – Hawthorn’s president-in-waiting when Jeff Kennett steps down – has been elected to the Hawks’ board.

Sources indicated to The Age that Silk had won one of two vacant positions, with lawyer Jennifer Holdstock and current director Tim Shearer vying for the remaining vacancy. That position will be announced at Tuesday night’s annual general meeting, held virtually. 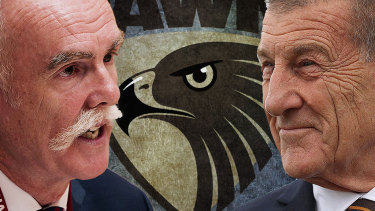 Former AustralianSuper boss Ian Silk has his eye on the Hawks.Credit:The Age

Silk’s landslide win has been seen by supporters as a sign there is an appetite for change at Waverley, coming after a turbulent year when four-time premiership coach Alastair Clarkson left the club in tumultuous circumstances, despite having a year left on his contract. The Hawks have had to pay out the $900,000 he was owed.

Kennett, having been re-elected unopposed at the 2020 annual general meeting for his second three-year term in what is his second stint at the helm, has declared he will not complete the two years remaining on his term and is likely to step down midway through next season.

Silk, who stood down this year as chief executive of the nation’s largest superannuation fund, managing assets worth $180 billion, is seen as the president in waiting. He was backed by the Hawks for Change, who ran an online campaign to loosen Kennett’s hold on the board by changing its composition.

Kennett has previously been conciliatory in his comments about Silk, whom he called “highly qualified”.