Jamie Elliott has completed a fairytale comeback from injury, slotting a career-best six-goal haul to propel Collingwood to a nail-biting five-point triumph over Adelaide.

After missing 10 weeks with a fractured right fibula, Elliott showed no signs of rust, dominating the Crows early and killing them off late.

He took full advantage of a faster, more corridor-focused attack by the Magpies who snapped a three-match losing skid, avoiding the slow, stodgy ball movement and defensive mindset that had undermined them in recent weeks. 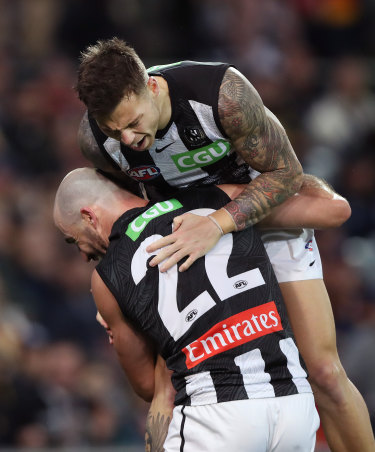 Got your back: Jamie Elliott’s return pleased his teammates.Credit:Getty Images

Rory Laird (40 possessions) continued his All-Australian form for the Crows who got on the board early when Darcy Fogarty curled through a fine left-foot free kick from the scoreboard pocket.
But for the next 25 minutes it was the Elliott show.

Elliott’s fourth goal – which came from his fourth kick after snaring his fourth mark – put the Magpies comfortably ahead by 23 points at quarter-time.

Adelaide put measures in place to inhibit Collingwood’s ball movement in the second stanza and comfortably seized control of the territory battle, overwhelming the Pies at the contest and on the spread.

The Crows had 20-7 inside-50s for the term but they were only able to trim the half-time deficit to six points due to a combination of their own errant goal-kicking and some sturdy defending from Collingwood’s besieged backline, led by Jordan Roughead.

Roughead had his hands full with Taylor Walker, who shook off an injury scare when he spent some time on the pine in the opening period having his right knee worked on to uncork a savage second-quarter purple patch which was only besmirched by a 1.4 return.

Midfielder Brayden Sier (jaw injury) subbed out of the match at half-time as Adelaide threatened to run away with it, moving ahead by eight points when Paul Seedsman bombed his second six-pointer from long range.

With Will Hoskin-Elliott enjoying a prolific third stanza, skipper Scott Pendlebury winding back the clock with a rare stint in the centre-square and the Magpies smashing Adelaide with a suddenly lopsided tackle count (29-8), the contest spun around again.

Impressive SA-born wingman Caleb Poulter jagged one back for the Maggies, Josh Daicos snapped skilfully over his shoulder and Steele Sidebottom calmy threaded the needle with seven seconds left until the three-quarter siren to push Collingwood in front by 11 points.

After Shane McAdam’s back-to-back goals gave Adelaide the lead back, it was that man Elliott who, fittingly, rubber-stamped a fine road victory against the odds by showing Lachlan Sholl a clean set of heels and goaling on the burst from 50m.

Skilful Shane McAdam turned it on with a fourth-quarter Indigenous Round virtuoso.

Wearing the iconic No.23 made famous by the great Andrew McLeod, McAdam did the jumper proud when he slotted a special goal from beyond the white paint in the right forward pocket to get Adelaide motoring.

He then got on the end of a much easier one from Riley Thilthorpe as Collingwood’s defence was opened up and Adelaide hit the lead.

McAdam was good … but in the end, Elliott was better.

The absence of gun ruckman Brodie Grundy was partially offset by the return of Elliott and Josh Thomas – and the pair were in the thick of it, especially early.

Elliott’s five first-half majors silenced the Adelaide Oval faithful while Thomas, back after missing last week’s loss to Geelong with a rolled ankle, produced a roving left-foot snap to help give the Magpies the initiative.

Thomas then launched Collingwood’s slick corridor chain which resulted in Elliott’s second major.
Elliott’s impact was hushed in the middle of the match but he stepped up when it mattered, brilliantly nailing his sixth – the sealer – deep into the fourth.