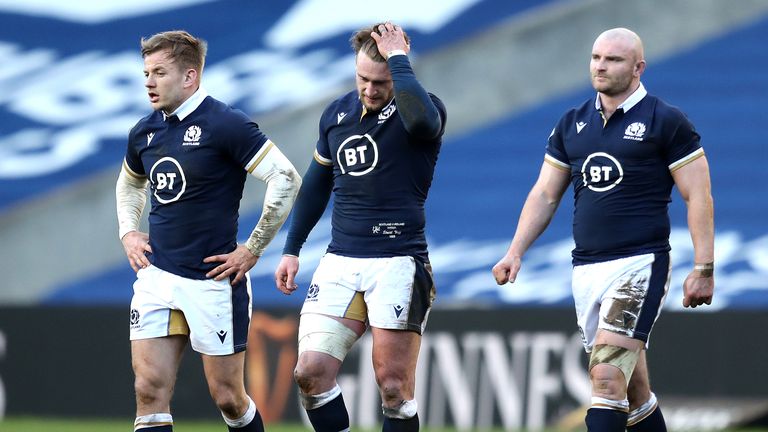 Scotland assistant coach Mike Blair insists they have to move on from taking confidence from narrow defeats.

Gregor Townsend’s side have followed a rare win at Twickenham with late setbacks against Wales and Ireland after clawing back deficits on both occasions.

After losing by a point against Wales following Zander Fagerson’s red card, Scotland suffered an even more disappointing defeat on Sunday when a late penalty proved the difference for Ireland in a 27-24 win.

Gregor Townsend has named a 35-man squad to prepare for this weekend’s #GuinnessSixNations match against Italy at @BTMurrayfield.

Asked whether they could take some confidence from their Six Nations campaign so far, Blair said ahead of Saturday’s visit of Italy: “Yes, but at the same time you should have seen the guys after the game.

“We’ve built up an expectation of the level of game we want to play and we didn’t reach that.

“We’ve got to look for positives, there’s no point in finding negatives with everything because that’s not going to help us, we have a couple of games still to play.

“We had a fairly blunt review of the game, the players are aware of what we need to work on, and the players know they need to get fired into Italy.

“We talked in the last Six Nations about becoming a team that was hard to beat. That was our number one thing going into the Six Nations last year.

“We’ve moved on from that now, you can see that by winning at Twickenham and close games at home, but now that’s not enough. “We’ve moved up a level but it’s not enough to say we’re close and in the game. That was Scotland teams before.

“This is a talented group of players and we know if we can play the best of our ability we can beat England away and Wales or Ireland at home.”

Scott Cummings dropped out of the squad after suffering a suspected hand fracture and both Finn Russell (concussion) and Jonny Gray (shoulder) remain major doubts.

“Finn will be unlikely with the short turnaround and the head knock,” Blair said.

“Jonny, we’re waiting to see how he’s progressing. As it is a short week, we need to keep an eye on him.”