Home » Rugby » Six years after his playing career was cut short, Kurt gets his chance to help the Blues

Kurt Drysdale, in the new job that Brad Fittler created for him, still has eyes for football.

It is one of the reasons why Drysdale’s love of football didn’t end when his footballing career did. 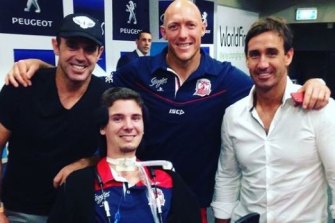 “To be involved from that footy perspective, anything I can do to help the team out, that’s awesome,” he said.

Drysdale recently moved to the Gold Coast and has no use of his limbs. Cutting-edge technology has meant the impediments are not insurmountable.

“I can control a computer with my eyes, to get access to the website and do the clipping up of the games,” Drysdale explained.

“The access of getting on the computer independently, being able to access social media and emailing, all of those kinds of things grow my independence.”

He has only been in the job for a matter of months, but Fittler is impressed with the quality of Drysdale’s work.

“He’s got an eye for footy,” Fittler said. “For all of my bitching about technology, it’s done wonders in this situation.

“This is the first year of hopefully a really long relationship. I look forward to him expanding on what he has started.”

Every year when the NSW Blues go into camp, Fittler and his coaching staff bring in inspirational figures to help motivate the side for the State of Origin series. Extraordinary tales have been told; of obstacles overcome, of successes achieved against all odds. Swimmers Ian Thorpe and Dawn Fraser, Winx’s jockey Hugh Bowman, Hollywood actor Simon Baker and jet fighter pilot Matt Hall are among the celebrities who have dropped in to share their stories with the Blues players over the years.

Drysdale doesn’t have their profile, but his attitude after his tragic accident is every bit as inspirational.

“He was the worst-case scenario,” Fitter said. “There are moments, especially initially, when there is a lot of energy [to assist] and then everyone gets back to their own life. That’s when people like Kurt suffer.

“It’s not easy. His parents have done a great job in getting Kurt to where he is now. He’s always a great chat. Whenever you chat to him, he’s got good energy and is upbeat. He’s a very motivating person.”

Like the rest of the rugby league world, Drysdale is still digesting the NRL’s crackdown on contact with the head and neck.

“It’s good that they are being cautious about it,” Drysdale said. “It’s new to me, I don’t know what the outcome is going to be.”

Drysdale’s role with the NSWRL is likely to expand. Where that takes the parties remains to be seen, but Fittler didn’t baulk when asked if there was a role to play in this or future Origin campaigns.

“That’s something I’ll be looking into,” Fittler said.