On a night already supercharged with emotion and symbolism, Josh Addo-Carr invoked one of the most iconic images in Australian sport as he channelled St Kilda great Nicky Winmar before the NRL All Stars match on the Gold Coast.

The Storm winger was already prominent in the Indigenous side's war cry as they responded to a fierce and memorable Haka from the New Zealand Maori squad. He made sure it would be unforgettable as he lifted his jersey and pointed at his skin, mimicking the moment when Winmar made his stand against racism in 1993. 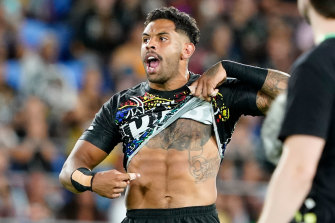 Josh Addo-Carr on the Gold Coast on Saturday night.Credit:AAP

That occasion is immortalised in the form of a bronze statue in Perth. Winmar made the gesture in response to abuse from Collingwood fans. It would become a defining moment in the ongoing fight against racial vilification in Australian sport.

The lead-up to the match, won by the Maori side, had already been intense and inspiring within both camps. For the Indigenous All Stars, the storylines had partly revolved around Latrell Mitchell's rise as a leader and revelations he had suffered racism on the field since he was eight years of age.

His stance on social media trolls has inspired a new voice among Indigenous players and Addo-Carr has clearly taken it to heart. In a football sense, it translated into a spirited and typically free-flowing contest that saw Mitchell debut at fullback and the introduction of the captain's challenge, which was trialled on Saturday night. It will also be used in next weekend's Charity Shield. 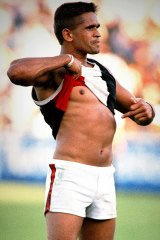 Media was briefed on the rule, which allows one challenge per team that must be made within 10 seconds of a ruling. It can be invoked only at a stoppage in play, like a try or penalty, not in passages of general play that don't require a ruling from officials.

Adam Blair was the first to try his hand when he challenged a knock-on ruled against Kenny Bromwich in the 65th minute. It was overturned and his challenge was burned for the night.

The Maori side took a 12-10 lead into half-time, with tries to Dallin Watene-Zelezniak (fourth minute) and Kodi Nikorima (27), while Josh Curran (17) and and Blake Ferguson (39) put the Indigenous All Stars within striking distance.

Mitchell, meanwhile, was warming to the task at fullback, growing in confidence as the game progressed and making a try-saving tackle just off his own line on Brandon Smith, who had worked up a full head of steam and had just one man to beat.

He would be used in the centres in the latter stages, with Alex Johnston at fullback, with Laurie Daley making full use of the unlimited interchange to rotate his players throughout the contest.

Broncos back-rower David Fifita had a breakout game in this fixture last year and would break the game open again, carving his way through towards the end of the third quarter to gallop 50m and set up James Roberts for a 16-12 lead.

But Smith would not be silenced for the Maoris. He burst through to score next to the posts with 10 minutes to play, proudly grabbing his jumper as part of the celebration, as his team edged two points clear.

After being denied by a double movement soon after, Smith could not be stopped from the run-around, stretching out and sealing the contest for New Zealand Maori.

Bulldogs forward Chris Smith was the major casualty on the night, being helped from the field in the third quarter due to a knee injury.

Transfer Whispers: D-Day arrives as Bulldogs set to ‘blow Panthers out of water’ with Burton offer

NRL: More needs to be done after Addin Fonua-Blake spray