Cameron Smith has confirmed his retirement from professional rugby league, announcing the decision at the unveiling of his statue at Melbourne’s AAMI Park.

Smith and fellow Storm great Billy Slater pulled back the drapes on Wednesday afternoon to reveal the bronze statues at their old hunting ground — but there was just one problem.

Many footy fans believed Smith’s figure looked nothing like the NRL legend it was supposed to be immortalising.

While examining the statue, Smith joked: “Yeah, got the hairline right.

“Is the head no good?

“Statue head is better than the real-life head.” 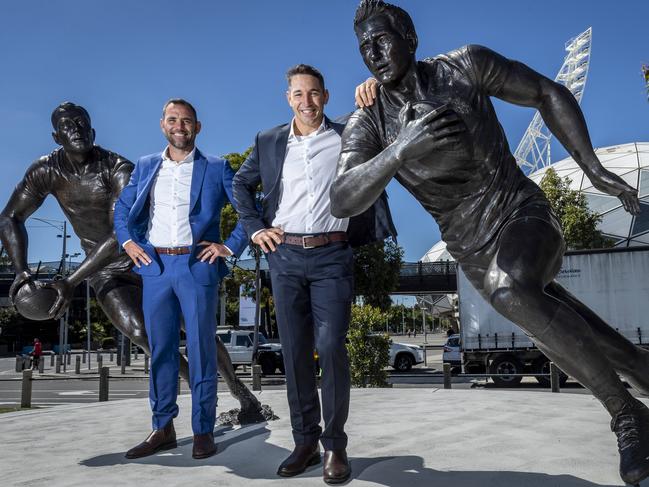 The statue of Cameron Smith.Source:Getty Images

By no means was the final product as disastrous as the infamous statue of football icon Cristiano Ronaldo at a Portuguese airport, which made headlines worldwide in 2018.

Speaking to reporters, Smith explained why he waited so long to announce his retirement, with speculation mounting about his future throughout the 2020 season.

“I had a really good opportunity to think over my thoughts on playing on or not playing on,” Smith said. “I looked back on my career and thought I was very fortunate to be a part of a wonderful organisation.

“It felt like the right time to finish on the back of what was a very successful season. You couldn’t ask for more than finishing with a premiership. Cameron Smith of the Storm poses with the Premiership trophy.Source:Getty Images

“I wrestled with the idea for quite some time, that’s why it’s taken so long.

“I spoke to a handful of people that are quite close to me throughout last year while the season was still on and then in the weeks after the season had finished — people like Billy. I was trying to talk with them on not only my situation but also pick their brain of how they came to the conclusion that it was the time to end their professional career.

“I had to wrestle with that decision because that’s what made it most difficult. At the end of last year, winning the premiership, I still felt good within myself physically and mentally and felt my form was still good enough to play in the NRL.

“But at the end of the day once I’d spent good quality time with my family up in Queensland, I knew that was the right time to finish.”

Maurice Rioli jnr and the attack of the plovers