Home » Rugby » Some of the pain, none of the gain: The Hawthorn fire sale that wasn’t

Hawthorn’s trade period was like the empty nesters who put the big old house up for sale, hoping to downsize to something smaller and new, only to watch it get passed-in at auction.

The Hawks ran a short, hurried, sales campaign with a few people through for inspections but when the moment of truth came they were left with vendor bids. Now they are stuck rattling around a house (and for that, read: salary cap and player age profile) too big for their needs.

Hawthorn suffered some of the pain of the firesale-style messaging without any of the gain. They told their senior players that they would trade them if they could because they wanted to reduce their salary cap and get earlier into the draft. 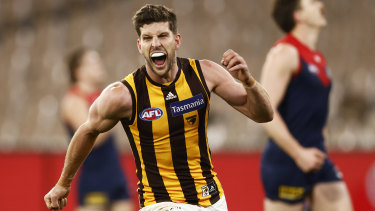 They told other clubs in so many words ‘we are open for business’, only to discover they were a sole trader. No one else was open for the sort of business Hawthorn wanted to do.

The deal that came closest to being done didn’t happen because the player didn’t want to go. This was not Hawthorn’s fault. It was a potential win-win for two clubs, but it didn’t work for the player involved, so it fell over.

Hawthorn wanted to trade Luke Breust to GWS for a deal that, in essence, would have slid them in from pick 24 to 13 in the draft. There was some fiddling around with back-end picks but the guts of the deal was a pick slide into 13.

The Hawks were prepared to carry a big chunk of Breust’s contract (this is the club paying their four-time premiership coach next year not to coach them, so they are not averse to buying the result they want) and the Giants were prepared to do the deal. 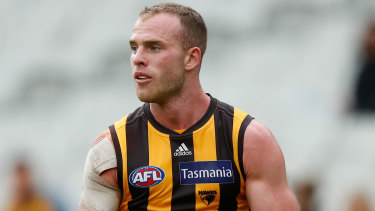 Tom Mitchell remains at Hawthorn after the trade period.Credit:AFL Photos

If you are the Giants, why wouldn’t you do the deal? Breust is a champion, you get him for three years when you remain viable for a flag, and it allows you to replace – and upgrade on – a player who wants to leave. It’s a good deal, even at Breust’s age.

If you are Hawthorn, why wouldn’t you want to do the deal? Yes, you pay Breust’s money but you get into 13 in the draft for the price of a player who will probably be retired before they are back in the eight. Okay, top four at worst.

But it was the player who didn’t want to go.

Hawthorn would hope to be able to conclude that the best message they can take out of Breust’s non-deal and Chad Wingard’s rebuff of GWS earlier in the week is that (aside from western Sydney clearly not being high on Hawthorn players’ holiday list) the Hawthorn senior players were not offended by being shopped around by their club.

Both players still wanted to stay.

Maybe it’s because, at their age, the players are mature enough and experienced enough to know this is the industry they are in, and not offended when they are shopped about.

Or maybe it means that, at their ages, they can’t be bothered uprooting their lives for a few years in another state when they have contracts that keep them in lives they are content with.

Perhaps it is more nuanced than that, and it means Hawthorn didn’t give themselves time to get these deals done. Maybe Hawthorn left it too late and didn’t get these deals sorted well before the trade window even opened. Given the turmoil of the coaching handover, that is not surprising, but when you are going to attempt something as significant as what Hawthorn wanted to do, you need to give yourself time to get players on-board and in-principle deals done.

Where this leaves Hawthorn now is a club that tried and failed to trade into the draft. They are a club that misjudged this year’s trade market. They figured that, like last year when big-name players moved, that regardless of cuts to the salary cap and deferred contract payments to players into next year, and regardless of cuts to list sizes, clubs would still have the appetite for their players and there would still be a healthy market. There wasn’t.

For all their club-in-a-hurry, earnest desire to refresh and replenish and rejuvenate their list, they have been left without having done much.

Jon Ceglar going out for a young ruck to come in for a shuffle of late future picks is not exactly radical list surgery.

Now they have to have conversations with those older players about what the plan is for next year. They wanted to bring in young players and drive forward with youth, so where does it leave the older, experienced players on the field next year?

Maybe they patch things up, wait until next spring, and put the house back on the market. Hopefully – for all clubs and players – by then the market heats up again.

‘This will be no tea party’: Eddie Jones and Owen Farrell expect Georgia to come out swinging against England