To put it mildly, BB Print Stadium in Mackay isn’t the first place that comes to mind when you think of the fabled derby between the Parramatta Eels and Penrith Panthers.

Aside from a few rounds of the displaced NRL season, its most memorable tenants have been KISS back in 2013 and Elton John in 2017. On Saturday night, it’s going to be less Paul Stanley, more Paul Momirovksi.

It’s fair to suggest the vast majority of the 12,000 fans at the knockout semi-final won’t quite grasp the wider significance of the match to both clubs, their supporters and the game in general. The tentacles stretch well beyond 80 minutes of football, up and across the Great Western Highway, to vast junior bases that help sustain the game as a whole in a region that has become the most pivotal in the sport.

It used to be said that if South Sydney was healthy, so was rugby league. There’s a strong argument that could now be applied to the pair of clubs in Sydney’s west, whose relative health will be an ongoing barometer for the NRL as it puts up its version of the Atlantic Wall to ward off incursions from rival codes looking to pilfer the abundance of athletic talent.

Eels lock Nathan Brown grew up in Fairfield and remembers junior clashes charged with emotion and laden with quality. That heavy investment from families, supporters and the major clubs shapes the aspirations of young players who want to make it to the top.

“Parramatta and Penrith have a massive junior base. As a young kid playing in that Parramatta area, there are a lot of young kids who really want to be NRL players. It’s a great thing as a club to have those juniors and a huge local base,” Brown said. 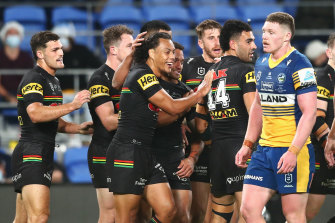 Penrith and Parramatta could have become one club just two decades ago but the power base in Sydney’s west has shifted once again.Credit:Getty

“You just fall in love with the game out there. Every time you turn up to a junior match as a kid, the parks are packed out and there are gun teams with lots of strengths. There’s a lot of competition in the whole region.”

First and foremost, there is the match. On that front, both teams have everything to gain and ample to lose. They are at varying stages of their build and progression but Parramatta and certainly Penrith feel they belong beyond the second week of the finals.

South Sydney’s upset win sent the Panthers into a sudden-death fixture and given their dominance this season and their grand final appearance in 2020, a straight-sets departure from the post-season would be nightmarish. With Matt Burton and Kurt Capewell among those departing, things are only going to get harder.

Parramatta would love to be the team that dumps their derby rival out on their ear but have issues of their own as they try to convince everyone, possibly even themselves, that they aren’t one of the teams making up the numbers while Melbourne, Souths and Penrith duke it out. 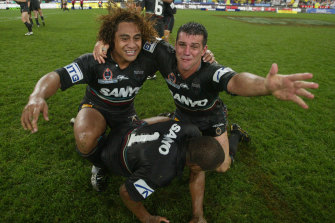 In an alternate universe, one in which Penrith and Parramatta had merged ahead of the 2000 season, there might have been just one team rising from the west. What a behemoth that would have been given the recruiting riches at their disposal.

But when that fell through, says Panthers 2003 grand final hero Scott Sattler, the tension between the clubs escalated and the already charged rivalry went to fresh new levels.

“People tend to forget but at the end of 1999, the teams were going to merge. I think it spiked even further after that. It was always the battle of the west but as soon as that fell over and Parramatta were starting to come into the Brian Smith years, I think it went next level,” Sattler said.

“They beat us in 99, they beat us in the finals in 2000, they beat us by 50 or 60 in ’01 and ’02. It continued to get out of control in relation to the rivalry because they were so good. We were more or less a little a bit jealous of not being the best team in the west.

“What Penrith and Parramatta invariably do is build depth for the entire competition. Their programs are so good they can’t keep them all.”

“Then 2003 was a different season, they had to beat us by 18 in the final round of the regular season to make the eight. And we had to win it to get the minor premiership … we ended up putting 40 on them. It lit a further flame underneath the rivalry.”

Sattler understands as well as anyone the importance of ensuring the code remains a powerhouse in Sydney’s west, partly because of his experience there and partly because he has been involved in the bid for a Western Corridor team in Brisbane to become the NRL’s 17th franchise.

Both are genuine heartland regions and home to large populations of Pacific Islanders, who are such dominant juniors and have helped revolutionise the game in terms of strength and athleticism. For the Panthers and Eels to be on the ground gives them a distinct advantage, although Sattler says the benefits of a thriving west are shared right throughout the NRL.

“It comes down to numbers, the critical mass. And in the west of Sydney and Brisbane, there is a critical mass of players. Then you have the ability to introduce a lot of those players into your elite pathway programs and keep them in the west, as opposed to going closer to the city or north to Newcastle or whatever it may be. It’s keeping them in the west and that’s such a big advantage,” Sattler said. 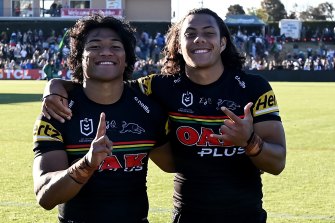 “When we won in ’03 we had eight or nine local juniors in the 18. And the Penrith team are going through the [same] exact cycle now. To be able to keep young kids in the west, with their families, is such an advantage. There is a big Pacific Island population as well, we all know how important family and those links are.

“So what Penrith and Parramatta invariably do is build depth for the entire competition. Their elite pathway programs are so good that they can’t keep them all. They end up providing really great talent for other clubs.”

It’s difficult not to be wistful about how this match would have looked in locked-down Sydney this week. A crowd of 50,000 would have been all but guaranteed as one of the western tenants will advance and the other will fall.

“Penrith are that young brash confident group of players. People want to hunt them and knock them down a few pegs. We came from a position in ’03 where nobody really expected us to win. They are in a very different place and it’s time to see if they can manage that sort of expectation.”