Essendon premiership player Tony Elshaug is another casualty of football’s coronavirus squeeze with the Bombers opting to lay off the veteran recruiter.

Elshaug, 59, had been hired by the Bombers last year as a part-time recruiter after his stint as St Kilda’s list and recruiting manager came to an end following the 2018 season. 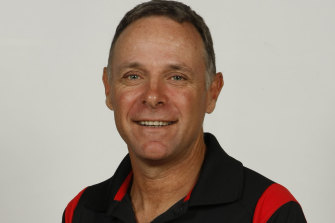 Tony Elshaug has been laid off by the Bombers.

“Trout [Elshaug] and I have been in the game for a long time … we have had a magnificent run … we are survivors … thoughts are with a younger generation in events, marketing membership, recruiting across all clubs etc that have young families mortgages and starting their footy journey … I hope they get back,” Shaw told The Age on Tuesday.

While around 80 per cent of AFL and club staffers have been stood down because of the league’s virus-related shutdown, clubs have also started making permanent cuts.

Shaw and Elshaug are among a handful of Dons staffers across several departments that have been laid off.

Veteran recruiter Matt Rendell has parted ways with Collingwood, while Carlton have moved on specialist coaches Greg Williams, Hamish McIntosh and Saverio Rocca among others.

Elshaug’s involvement in league football has spanned more than four decades. Between 1979 and 1988 he played for Melbourne, Essendon and Collingwood, earning a premiership medal with the Bombers in 1985.

He was then a long-time lieutenant to Denis Pagan at North Melbourne and Carlton before joining the Saints at the end of 2006, serving first as an assistant coach and then in the list management and recruiting sphere.

Bombers chief Xavier Campbell penned a letter to club members last month in which he detailed the challenges facing the AFL and its clubs.

"In response to this significant challenge, we have moved to drastically cut operating costs to help the club get through this period," Campbell wrote.

"As a result, the club made the heartbreaking decision this week to stand down more than 75 per cent of our staff, across every operational area of the club, until further notice."

Clubs are bracing for the league's football department soft cap to be substantially reduced ahead of next season.