St Kilda co-captain Jack Steele has capped a fine year, claiming his second Trevor Barker award in as many seasons, as the Saints eye a 2022 campaign when club bosses believe their premiership window opens. 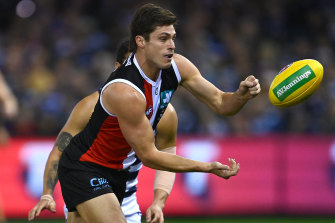 Jack Steele was the Saints’ standout in 2021.Credit:Getty Images

Steele, 25, averaged a career-high 29 disposals, 14 contested possessions, eight tackles and six clearances throughout a season in which the disappointing Saints managed 10 wins and failed to make the finals.

He had less than 25 disposals only four times for the season, while he had 30 possessions or more in 11 matches, including a season-high 37 disposals against Port Adelaide. He is one of 29 Saints to earn multiple Trevor Barker Awards, joining such greats as Robert Harvey, Tony Lockett, Nicky Winmar and Ian Stewart.

Steele joined Jarryn Geary as co-captain this year but could hold the position outright next year.

Coach Brett Ratten is off contract next season, at a time when president Andrew Bassat believes the Saints’ “genuine” premiership window will be open, ensuring the spotlight will be firmly on his club.

As the off-season reshuffle continues, the Saints have secured former Geelong star Corey Enright as an assistant coach. Enright, a triple premiership player, had been an assistant under Chris Scott, with the Cats also making changes after a heavy preliminary final defeat.

“I’m really looking forward to this next chapter with the St Kilda Football Club,” Enright said.

“I’m proud of what I learned throughout my time at the Cats and am thankful for all the opportunities they’ve given me. However, I’m looking forward to a new challenge.

“I believe the Saints have a really exciting young group and I can’t wait to get to work.”

Enright is the second recent appointment, joining head of high performance and conditioning, Nick Walsh. The Saints have turned their focus to development through the pre-season. and will look to secure a full-time head of development.

Jack Steele (Sainter of the Year)